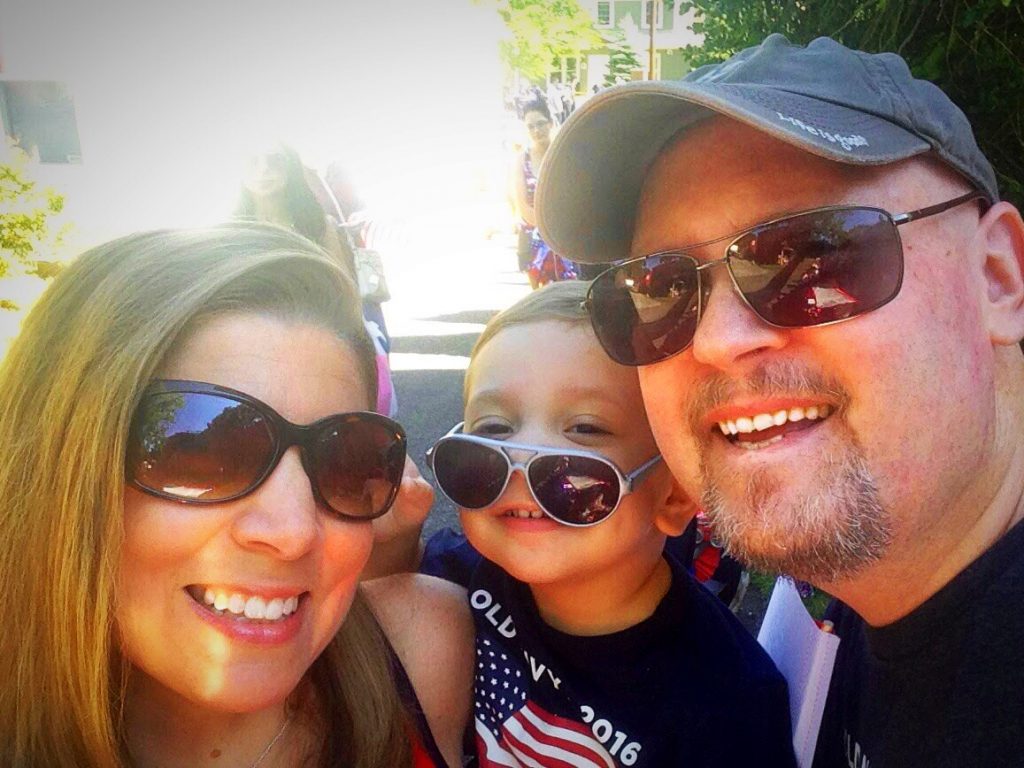 Jen and Pete adopted through American Adoptions in 2014. Two and a half years after their adoption, Pete died after a lengthy battle with cancer. In this blog post, Jen looks back on what adoption meant to her and her husband then and now.

My husband Pete battled cancer in 2006 and survived, despite extraordinary odds.

He had an extremely aggressive form of leukemia that knocked him down more times than we could count. His cancer didn’t respond to treatment, and his body had been through the wringer. A stem cell transplant was his only hope for a cure, but because of the aggressiveness of the disease and his weakened state, Pete was told there was only a 2% chance that he would survive.

Yet, when presented with those odds, Pete’s response to his oncologist was, “Well, someone has to be that 2%.”

For as gentle a guy as my husband was, he was tenacious when it came to fighting his cancer. As long as the doctors had a treatment to offer — despite the risks involved or its uncertain effectiveness — Pete was going to take it.

And Pete proved to be that 2%. He survived the transplant and went on to be declared cancer-free!

This was reason to celebrate. Yet Pete struggled. And it wasn’t the physical toll that he struggled with most; it was the guilt — guilt that he had survived when so many others he’d met along the way did not.

Pete would often revisit that question and that guilt. He would ask me again and again. I know he really wasn’t looking for me to provide him with an answer, but of course I felt I needed to give him one. No matter what I said, he’d shake his head.

Time went on and we moved forward. And after several years, Pete and I returned to talking about starting a family, a discussion and plan that had come to a halt when we received Pete’s diagnosis. We visited doctors, discussed our options and began fertility treatments. All to no avail.

Time, energy, money, and a roller coaster of emotions later, Pete and I realized that becoming pregnant was not in the cards for us. And truthfully, we were both okay with that. Being pregnant wasn’t what mattered to us; being parents did.

Pete and I realized that adoption was how we were meant to start our family.

So, Pete and I excitedly reached out to American Adoptions. We were lucky that some of our family and friends had already done the legwork of researching adoption agencies when they, too, adopted. They shared their positive experiences with American Adoptions, recommending this agency without hesitation. We applied and began the process to start our family through adoption. I can still close my eyes and feel the pure excitement and sheer joy of that moment.

Just a few months after our profile went “active,” we received the call that a prospective birth mother had selected our profile — we were matched! And our baby boy was already here!! He was born just hours prior.

Following a whirlwind of events and a next-day flight to Florida, we were holding our son in our arms 24 hours later. It’s still the greatest moment in our lives.

Pete and I returned home and began our long-awaited and much-anticipated life as a family of three. We were on cloud nine. Life could not have been better!

But life has a funny way of changing direction when you least expect it. Just two and a half years after our son’s adoption, Pete became sick. We noticed he was losing weight (unintentionally) and was more tired than usual. He scheduled a visit with his doctor who performed several tests and scans.

The phone call that came days later was one we never expected. It was cancer. Again. This time, pancreatic cancer.

His doctors were just as surprised. With leukemia, a relapse isn’t unheard of. (And being 10 years out, we figured Pete was in the clear.)

But a secondary cancer? Not what anyone expected.

Pete made the decision to undergo treatment, even after learning of the aggressiveness of this type of cancer and its poor prognosis. If the doctor was offering a chance at life, Pete was taking it.

I watched him endure radiation and chemotherapy for the next two months. His treatment was interrupted several times, as Pete was hospitalized for complications. He was home for Christmas and the month that followed. But his cancer didn’t respond to the treatment, and Pete found himself back in the hospital in February as things took a turn for the worse.

It was only after his doctors told Pete that there was nothing more he could do that Pete finally put down his gloves. I was told to have family and close friends come to say goodbye to Pete.

It was during those final couple days of Pete’s life, while in his room in the Intensive Care Unit, that I realized why Pete survived. What he was supposed to do.

And Pete turned to me and smiled and said, “You’re right.”

Reflections on the Journey

Adoption brought us the greatest gift. And that little boy is the reason I get out of bed every morning.

Shortly after Pete’s death, I began thinking about what our son’s birth mother was thinking. She was aware that Pete had died. We had developed an open relationship with her and she was (and is) a part of our lives.

I finally asked her, “Do you regret placing (our son) with Pete and me? I know you wanted him to grow up with both a mom and dad.”

She didn’t hesitate before responding, “Absolutely not. I don’t regret choosing you for a minute. I got to make Pete a dad, even if only for a couple years.”

The gift that those words were, and that she is, and continues to be.

I thank God every day for my son. And for his selfless birth mom. And for American Adoptions, who made it all possible.

And I know Pete is looking down on us and smiling.