What Video Games Get Right and Wrong About Adoption

From life‐simulation to visual novels, there’s a little something for everyone in the world of video games — including those who are looking for an adopt-a-baby game that emulates their own dreams for raising a family. Virtual baby adoption games have been around for years, and while some have more depth than others, there are many options for those looking for the perfect adopt-and-raise-a-baby game. 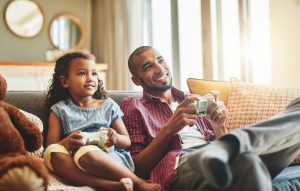 But just like with any media portraying adoption storylines (including books, movies and TV shows), you have to wonder: Just how realistic are these adoption-themed games? Are some games more adoption-positive than others?

Here are the top adopt-your-own-virtual-baby games with elements that we recommend for new players looking for a positive adoption game — along with some things that video games tend to get wrong about adoption.

Adoption has long been a staple in The Sims, even back when the series was strictly on the PC. The most recent iteration is The Sims 4 —which is available through Origin on Mac and PC, as well as the PlayStation 4 and Xbox One. As a series, The Sims has always been very adoption‐friendly, which makes it the first on our list for the best adopt-a-virtual-baby game.

Like they should be in real life, children that are adopted in The Sims are never treated differently from any other family members, and they are visually included in the family tree. Players that are interested in this adopt-a-kid game can definitely utilize the expansion pack, aptly titled Parenthood, to make use of new features for their adopted child.

Instead of having to work with a certain type of adoption agency to meet their adoption goals, such as domestic, infant, or an international adoption, players are able to choose from a selection of adoptable babies, toddlers and children as soon as they start the game — with the condition that they have at least 1,000 simoleons (The Sims’ form of currency).

The Sims is, and has always been, extremely progressive when it comes to LGBT characters, and there is absolutely no barrier to which adult Sims can adopt. Adopted children can be taken away by a social worker due to neglect, but the social workers themselves only make an appearance in the series up until The Sims 3.

The Sims 4 takes away the legality of an adoption and makes it much easier for players to build their virtual family. But with that being said, it’s extremely different from a real-life adoption.  There is no home study, you don’t have to budget for legal representation, and you don’t get to meet the prospective birth mother whatsoever. Adoptive families in real life also won’t be adopting from a pool of available children, and the wait time will be much longer than a few seconds of in‐game time. The only realistic portrayal is the inclusion of a social worker, but even that doesn’t play significant part in the game’s narrative, as your social worker is delegated to the role of a non‐player character (NPC) and doesn’t provide any adoption‐related services. While adoption will always be a fun aspect of the series, this adopt-a-virtual-kid game definitely isn’t realistic.

Stardew Valley is the 2016 indie smash‐hit lovingly created by Eric Barone, also known as ConcernedApe. Players are able to leave their monotonous corporate life behind and trade for a “do‐over” of sorts when they inherit a farm from their late grandfather. The farm itself is pretty worn down, and it takes a lot of love and care to bring it back to the glory days, but nobody said that farming was easy. Newcomers have several options for playing this gem of an adopt-a-virtual-baby game, including the, PC, Nintendo Switch, PlayStation 4, PlayStation Vita, Mac, i0s, and soon, Android.

The game has plenty of features to keep players interested for hundreds of hours, including fishing, mining, raising animals, and more.  If they’re interested, players can also settle down and start a family with one of the 12 “marriageable options” (six female and six male options). The biggest appeal is that you’re not limited to starting a relationship with a character that is the opposite gender of yours. Unlike The Sims’ adopt-a-kid game, however, the only characters who are able to adopt a child are those in a same‐sex relationship.

This is, of course, not true in real life, as many heterosexual couples choose adoption as a route to building their family. All types of relationships are portrayed positively in this adopt-a-virtual-baby game, however, and there is no distinction between adopted and non-adopted characters by other NPCs. Players that are looking for a friendly experience where adoption and LGBT couples are always portrayed positively should definitely give this computer game where you adopt a baby a go.

Skyrim is one of the best, if not the best, installments in the long‐running Elder Scrolls series, even seven years after its original release. Fans of the series continuously praise its limitless open‐world, where most of the time the side‐quests can easily overrun the main story. With so much to do, plenty of players have taken this opportunity to build a family in their game, but you can’t have a child biologically.

Instead, players are able to adopt kids in Skyrim to build their virtual families. And when it comes to finding out which kids to adopt in Skyrim, there are many options to choose from. Before players can adopt a child, they must have an add-on called The Elder Scrolls V:Hearthfire. Children can be adopted from the Honorhall Orphanage, provided there is room for them. Like most other fantasy games that include adoption, this feature doesn’t have a huge impact on the main story, so players looking for a realistic approach to adoption might wind up disappointed.

There are some mobile games, like The Sims Mobile or Kim Kardashian Hollywood, that include adoption for players after ranking up to a certain level. For example, in the Kim Kardashian adopt-a-baby game, this option is unlocked once you reach level 9. Both games are visually appealing, and there are a lot of options when it comes to customization for your characters.

There are a ton of options when it comes to free virtual baby adoption games beyond these two, where players have plenty of options if they’re ready to raise a family. Mobile games are also the most accessible for newcomers, and you can take them with you wherever you go. These games are a good introduction to adoption, but there usually isn’t any depth to this feature, and players may end up wanting more if they continue to play.

While there is plenty of creative freedom when it comes to virtual baby adoption games, we wouldn’t exactly recommend them if you’re looking for a more realistic portrayal of the adoption process. Players should enjoy them for the fun experiences they provide, but probably shouldn’t look any deeper than that when it comes to these adopt-a-baby game downloads.

What are some of your favorite — or least favorite — games with adoption themes? Let us know in the comments!