3 Things I Wish You Knew About Birth Parents

“How many children do you have?” the lady in line asked me.

“Four, I mean three. Well, three at home,” I awkwardly replied. This question is always one I dart around as a birth parent. Right after placement, there was no hesitation; I would respond quickly including the baby that I placed for adoption. When people were confused, only seeing three children in tow, but not the fourth, I would explain that I am a birth mom. Typically, this would start up a positive and interesting conversation, but often it has led to some awkward silence. I felt guilty for not accounting for the daughter I placed when asked how many children I have, but I wasn’t always up for explaining the circumstances. Honestly, most days I am Gina the birth mom, but there are rare occasions when I want to be Gina.

It’s something I wish more people understood, along with these three guidelines for talking with a birth parent:

Like anyone who is experiencing grief, there are moments when you want to be open and honest, and there are days you’d rather not talk about it. Respect the space of what the day brings. If a birth parent you know is not in a space to communicate their advice or story, respect where they are. The rollercoaster of emotions that happens post-placement can be a crazy and nauseating ride. It takes years to navigate; seventeen years after placing, I still have moments when I don’t want to discuss adoption. Building a friendship and a trusting bond will help your birth parent be more open and relaxed. 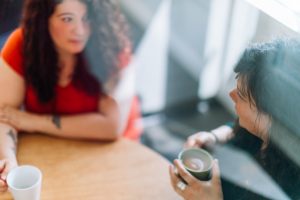 Sharing your adoption story and personal insight can be scary. It’s opening wounds and scars that may or may not have healed yet. When you read a birth parent’s story or have the pleasure of hearing one personally, take note of the amount of trust it takes to be open about something so intimate. Respect the information with secrecy, unless otherwise advised. It takes a lot of courage for birth parents to talk about their adoption stories in a world that is full of pointing fingers and judgment. Honor them, their story, and where they are at in their journey by being respectful.

If you see me standing in a line somewhere or hear me talk about my children online, you might hear me say I have three children and you might hear me say I have four. This is not out of disrespect for the baby that I placed for adoption; this is me listening to my gut instinct on how to respond to my audience. There is no greater love than that of a birth parent for their children that are placed for adoption.

There are many assumptions when it comes to birth parents. Society places stereotypes on a group of people to categorize beliefs or decisions that appear out of the norm. The truth is, we are all out of the norm. Every decision you make, the way you act or interact could be considered “abnormal” to one person or another. When the majority finds a common belief and labels it as “normal,” they create stereotypes to help them justify their own opinions and decisions. Majority rules in our society and, when you’re not in the majority, you are exposed to more judgment, assumptions, and bias.

Being a birth parent is not the majority, and I am often categorized as an addict or an unfit parent. The truth is, I was young, but I was neither an addict nor an unfit parent. In fact, I had a stable support system that would have rallied behind me had I chosen to parent. When I talk about placing my baby for adoption, and it feels so out of the norm to the person I am talking to, they will say just about anything to help them digest the information.

“Why did you give up your baby for adoption? I mean, I can see why you would want your teenage years back, that make sense to me,” said the lady sitting next to me in the airport.

This lady asked me what I do for a living, and when I replied that I was a writer, mostly adoption-related, and that I am a birth mom, this was her reply. She left no time for me to answer her first question; she had already “justified” my decision with her next sentence. The irony in thinking that I was able to obtain my teen years back had me laughing out loud to her response. No, I did not place my baby for adoption to get my teenage life back. I did not move back into my college dorm with my roommates and restart the life I had left. I became a mother. I became courageous. I became selfless. I became a birth mother. There was no way I could go back to my life the way it was as if nothing had happened; I wasn’t just a teenager anymore, nor did I want to be. I was much more.

Assumptions come in all shapes and sizes for you to swallow information that feels out of the norm. What I wish people would consider when talking about adoption and birth parents is this: not all jeans fit the same and not all adoption stories are the same. Not all birth parents are the same. When you find yourself in a conversation with someone who has made a decision that feels outside of your norm, refrain from making assumptions as to why they made that decision. Instead, ask them. I am fascinated with why people make the decisions they do, but if I made assumptions as to why I think they did, I would never learn the real reason. Drop the stereotypes, stop the judgment, refrain from assumptions and ask more questions or respect the space of where that birth parent is. The majority doesn’t always have to rule. We can all be unique in our beliefs, our decisions, and our lives.

3. Take the following phrases out of your vocabulary.

“I could never do that.”

I hear this statement often after telling people I am a birth mom. “You’re a birth mom? I could never do that.” I am not easily offended; in fact, there are many hurtful statements that I hear, and I don’t bat an eye at. All birth parents will have their own set of “trigger” words or statements that they are sensitive to. This one is mine!

The hurtful part for me is, do you think I ever thought I could do “that” either? I didn’t grow up hoping to become a birth mom someday. I, too, never thought I could place my baby for adoption. In fact, my first thought when considering adoption was, what if I see her and I can’t do it? I was terrified that I too “could never do that.”

We all have our unique callings in life. We are all brought here to learn and grow. I don’t wish my path of being a birth parent on anyone, but I also have found a lot of strength and growth on the road less traveled. That being said, I don’t turn to someone who has experienced a death of a child and say, “I could never do that.” Now, placing my child for adoption was a choice, and death is not. I understand that, so please take this comparison with a grain of salt. But grief has the same definition in both circumstances. I was called to be a birth mother, and yes, I could have shouted out “no way.” But for me, it was not as much of a choice as it was my calling.

When you find yourself in a conversation with a birth parent, please refrain from using this statement and instead replace it with something more encouraging; you are brave, or you are courageous. The reaction you will receive will be ten times more rewarding for both parties.

“Give up your baby up for adoption.”

How often do you hear this phrase in the media? How often do you hear yourself saying this same thing? I’ve been in the adoption world for over seventeen years now, and there isn’t a more misused phrase out there. Have you ever researched the phrase “give up”? The definition reads: cease making an effort; resign oneself to failure.

I walked around my religious community for nine months wearing a scarlet letter, while my boyfriend told his friends we had merely broken up and I moved away. I chose adoption in spite of naysayers and judgment. I showed up to every doctor’s appointment, took prenatal vitamins, and cared for my body. I took a hard look at my life, my choices, and who I wanted to become in those nine months. I delivered a perfect baby girl when I was just a girl myself. I never knew love in that depth until that day. Four days later, I placed my baby girl in the arms of a loving couple. Grief swallowed me whole for years. Does that sound like ceasing to make an effort? Does that look like a failure?

I did not give up my baby for adoption. I chose to place her for adoption with a couple who were called to be her parents, as much as I was called to be her birth mother. Suggesting I ceased to make an effort is not only offensive, it’s hurtful and disrespectful! I placed my baby for adoption. I gave up my parental rights; there’s a big difference. If you want to know what birth parents wish you knew, educate yourself on terms such as this one. Be sure to correct anyone you hear who uses this statement. Being a birth parent isn’t easy. Respect their space. Refrain from making assumptions, and remember a compliment and an open heart can go a long way! 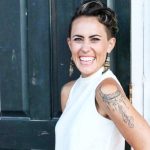 Growing up in Utah County, unwed pregnancy by age 19, Gina always found herself outside of the Utah cultural box. Shortly after placing her baby girl for adoption in the fall of 2000, she started her own non-profit organization, Birth Mother Baskets. Her goal was to provide hope, support, and courage for birthmothers, post placement.

After fourteen years of running Birth Mother Baskets and being an adoption advocate, Gina stepped away to pursue a corporate job as a Creative Arts Manager.

A severe concussion in 2016 led Gina back to rediscover her true passion for writing. She left the comforts of the corporate paycheck and is now writing a memoir.

Gina still lives in that cultural bubble of Utah County with her husband and three children. She enjoys changing people’s perception of birth mothers and their place in adoption.