Adopting When One Spouse is Deployed

Military adoption is more common than you might think.

There are more than 1 million people in the U.S. military. Many of these individuals are married; some to another military spouse and others to a civilian. In either case, it’s common for people to start a family while in the military. Many choose to do this through adoption.

As you know, military life can be unpredictable. A move to a new base or a deployment can spring up on you with very short notice. How can this work with adoption? Is adoption still possible if one spouse is deployed?

Yes, it is. Here are some important facts you should know about adopting when one spouse is deployed.

Adoption is Possible for You 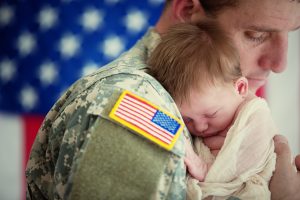 Parenthood is one of the great joys and challenges of life. The way people get there is a unique journey. The one truth that unites them all is this: Anyone who dreams of becoming a parent deserves to see that dream fulfilled.

You don’t have to sacrifice that dream as you serve our country in the military. Military adoptions are relatively common, even when one spouse is deployed. There will be a few extra steps, but as a service member, you know that most things worth doing don’t come easy. The challenge only increases the reward. And what greater reward is there than starting a family?

Types of Adoption to Choose From

Just like any other adoptive parent, you’ll have to choose which type of adoption is right for you. It’s a good idea to consider this at the very beginning of the process. It’s one of the most important decisions you’ll make during your adoption. Ideally, you’ll reach a decision before deployment; that way you won’t have to figure this out while long-distance.

In general, there are three types of adoption you can choose from:

If you want to adopt a baby from the U.S., then domestic infant adoption is the right choice for you. If you feel motivated to provide a loving home to a waiting child who may be a bit older, there are thousands of children in foster care who need to come home through adoption. International adoption could be great for military families who are stationed overseas on a long-term deployment.

There are plenty of pros and cons to consider, and it all comes down to the specific details of your circumstances.

The Adoption Process While Deployed

Most of the military adoption process is the same as any other adoption. However, there are some important differences to keep in mind.

First, the deployed spouse will need to sign over power of attorney to the other spouse before deployment. The adoption process involves a lot of signatures on a lot of documents. If one spouse is unable to legally sign for the other, it will cause a lot of delays. This is arguably the most important step to take before deployment to keep your adoption moving steadily along.

Another area where your adoption process may depart from the norm is the home study. Depending on the point of the process when your spouse is deployed, you may be required to update the home study. If both hopeful parents relocate for the deployment, a new home study will need to be conducted according to the standards of the new country of residence.

Additionally, your travel could be affected by deployment. In a typical domestic infant adoption, the adoptive parents travel to the birth mother when she gives birth. You will still need to plan on traveling, and, due to deployment, this could be more expensive.

Many other steps along the way will be the same as any other adoption process. Deployment adds a few wrinkles, but it doesn’t rule out a successful adoption.

So, we’ve talked about a lot of the challenging stuff. Let’s move on to something a little more fun — potential adoption benefits you could qualify for thanks to your military service.

The Department of Defense Adoption Reimbursement Program will give you up to $2,000 for qualified adoption expenses per child. These types of expenses can include agency fees, home study costs, medical bills, legal expenses and more.

The military also typically grants adoption leave after placement, giving up to 21 additional days of leave to service members to be with their family. If both parents are stationed overseas, there is also the option to use military child care when you return from leave.

Along with these military-specific benefits, there are also other cost-reducing options to consider, like the federal adoption tax credit.