New Study Shows Why Children Should Know Their Adoption Stories

Children who learn of their adoption from a young age and grow up in a household with honest, open communication have less distress and a higher quality of life.

This is the result of a study recently reported on by The Atlantic. It confirms what American Adoptions preaches to all of the families we work with: Celebrate adoption; don’t keep it a secret.

This may come as a surprise to those who only experience adoption through pop culture like movies, books and TV shows. The surprise adoption reveal is a common trope for characters in stories. If they know they are adopted they will feel less loved, the thinking goes, so the parents kept it a secret. The popularity of this storyline doesn’t come out of thin air — many adoptees have had their own story kept secret. However, keeping adoption a secret is not beneficial to children, and the common reasoning for doing it is flawed in several ways.

As this new study from the Journal of Family Issues reports, honest communication with children about their adoption from a very young age correlates to a higher quality of life and a better family relationship.

Secrecy: A Way of the Past 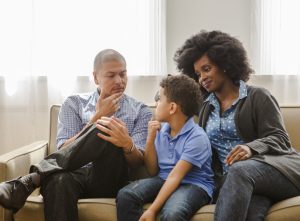 Adoption looks different today than it did three decades ago. The whole process has changed. The orphanage system was abolished and replaced with two complimentary pieces: foster care for children who need to be removed from their home to ensure their safety and private adoption for birth parents who voluntarily create an adoption plan.

Secrecy defined the old process. A woman would, as is depicted in many popular movies, leave her child at an orphanage or leave town to give birth, where doctors would whisk the baby away and place him or her with an unknown family. The child would have no way of knowing their birth parents, and the birth parents would have no way of knowing what happened to the child.

This secrecy came through on the other side of adoption. It was common for parents to withhold their child’s adoption story, and even to create fictional birth stories instead, as The Atlantic notes in its report. The thinking went that it would be too much to handle for a child to hear that they were adopted and it was better to protect them from that knowledge.

This thinking, however, is deeply flawed. In contrast to this type of secrecy, the findings of this new study provide scientific support to early and honest communication about adoption with children.

The key findings from the study by the Journal of Family Issues, as stated in the study and summarized in additional reporting by The Atlantic, are as follows:

One of the most important revelations of this study is the source of pain from late discovery adoptions. While every story is unique, the study’s author, Amanda L. Baden, found a common thread.

“The thing about late discovery adoption is, everyone else already knows,” Baden told The Atlantic.

It is the pain of betrayal, the discombobulating realization that the people closest to you have upheld on ongoing ruse for years, which stings the most. Adoptees are not devastated to learn that they are adopted. They are hurt by the knowledge that they have been lied to.

Today’s adoption is totally different from the way things used to be. Prospective birth parents are in control of their adoption plan and most adoptions are open, which creates a lasting connection between the child and their birth parents. Because of this, and due to a continually improving understanding of child psychology, the consensus among most adoption professionals today is that children should be told of their adoption at a very young age.

Adoption does not create second-hand status. Family is more than biology; it is love. If your foundational assumption holds adoption to be an unfortunate reality, of course you would keep it a secret. But if you embrace adoption for what it really is — a loving and courageous act that forms a beautiful family — then you would want to celebrate it, not hide it.

As this study reports, adoptees who know about their adoption are less likely to deal with the distress and anxiety that are connected to late discovery adoption. In our experience, open adoptions add even more to the benefits a child experiences. As they grow up, not only are they secure in their adoptive family but they are also connected to their heritage. This creates a strong foundation for a positive self-identity centered on honesty.

We know how hard it can be to start the discussion, especially if it’s something that has already been delayed. How do you even breech the topic? There are many great resources for telling your child about their adoption. If you can, start very young. Tell adoption bedtime stories. Make it a normal part of life — something a child can embrace.

Keep one thing clear at all times: you are so, so loved. A child, especially if they are older, might react in many different ways. The best plan for you is to do everything possible to make sure your child feels loved and safe. This is far more important than a child “understanding” adoption. That will come with age and maturity. Right now, what’s important is honesty, security and the knowledge that a family’s love is much stronger than biology.