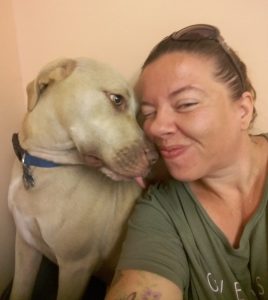 Jocelyn always understood how adoption could change the lives of all involved: adoptive parents, birth parents and adoptees like herself. She’d seen it firsthand in her mother, who tried for nine years to adopt a child before Jocelyn came into her life.

So, when Jocelyn found herself unexpectedly pregnant at the age of 22, she knew what the right path was for her. In the next two years, Jocelyn would place two children for adoption — a choice informed by her own experience as an adoptee and her knowledge that she was doing the best for her family.

“I had an amazing life with my adoptive mother,” Jocelyn says. “I thank my mom every day for being my mom, and I just knew that my sons would both get amazing lives that I couldn’t provide for them at that time.

“I was alive because my biological mother decided to give me up for adoption instead of have an abortion,” she adds. “It’s a gift-keeps-on-giving, kind of thing.” 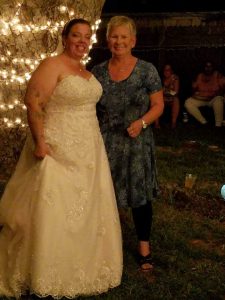 Jocelyn with her adoptive mother

Born in 1980, Jocelyn was adopted by her mother through Catholic Charities. At the time, her parents were stationed in Germany due to her father’s military career. Jocelyn’s biological mother was 17, and she chose a closed adoption. Jocelyn wouldn’t meet her biological mother until she was an adult herself.

As Jocelyn entered adulthood, her life took several different paths. At 17, she had her first son. At 19, she gave birth to her daughter and escaped an abusive relationship with their father. About a year later, she found herself homeless, and her children were subsequently taken by authorities and placed in the custody of their paternal grandmother.

Coping with the pain of losing her children and the instability of her situation, Jocelyn became pregnant in 2002. While she considered the idea of keeping the baby, the realities of her circumstances led her to adoption.

“I already had two kids that knew me as Mom, and I wasn’t there for them,” she remembers. “So, the best thing I could do for this baby was to find a wonderful family that would love him and also care for him much better.”

She placed her son, Matthew*, through Gift of Life Adoptions in an open adoption. She got to know the adoptive family, and she expressed her desires to receive pictures and letters as Matthew grew up. Being able to see how happy and loved her son would be was important, she says, but she was saddened when she stopped receiving pictures upon his 12th birthday. 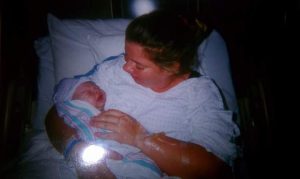 Jocelyn with her son before placing him for adoption

Two years later, Jocelyn was reunified with her older children — but found herself pregnant again. She contacted Matthew’s parents, but they did not want another baby. From there, Jocelyn seriously considered terminating her pregnancy. But a chance encounter with an old family friend connected her to a waiting adoptive family through Catholic Charities.

“The adoptive mom and I talked, and we immediately hit it off,” Jocelyn remembers. “I thought, ‘I’m the oven — this is your bun.’ We became really close during the whole pregnancy.”

Jocelyn ended up placing her son, Jonathan*, with the adoptive mom. While they had a close relationship during her pregnancy, Jocelyn has no contact with her son today, and she is only in contact with his adoptive mom on Mother’s Day each year.

She says she’s always open to more contact with her sons as they become adults, but she’s at peace with her decision to choose adoption for them, whatever challenges there were along the way. Her older children, now 20 and 19, are working in landscaping and in college, respectively. Jocelyn, now 38, is happy to say she living a successful life herself.

“I’ve made a lot of mistakes in my life, in my early 20s and my teens,” Jocelyn admits. “For me, adoption changed my life. Knowing what I had to do, it opened my eyes… It made me who I am.” 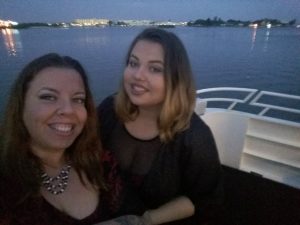 Jocelyn with her daughter

Her Advice for Other Birth Mothers

Part of the reason that Jocelyn is opening up about her story now is to help other pregnant women considering adoption. While she completed her adoptions more than a decade ago, she wants her story to resonate with other expectant mothers and help them advocate for themselves.

Below, Jocelyn shares her thoughts and advice for women at all stages of the adoption process.

“Adoption is looked at like you’re doing something wrong, like you should do whatever you can to take care of that baby. But giving that child to somebody who, one, wants them — adoptive parents jump through hoops to get that baby. Two, you’re giving that child a much better life than you can offer them at that time. It’s the most selfless thing you could ever do. It hurts you, but it doesn’t hurt the baby. That baby is going to grow up and have a wonderful life with everything they could possibly need.”

“I had to explain it pretty carefully to the kids; they were pretty little at the time. Now, they’re very aware of what happened, where I was at the time, and why the adoption took place. There was a lot of confusion for them for everything: Why is Mom pregnant? Where is the baby at? It’s about sitting down and being frank with the kids. From the very beginning, the kids knew I was having a baby and that the adoptive mom was the mom. Their knowing that I was doing it because I needed to be there for them helped, as well.”

“Birth mothers need to know what they’re allowed to want. They kind of give you these rules, and you feel like you don’t have any say. There are many different kinds of adoption out there, and there are many adoptive parents that will give certain things. Birth mothers need to know everything — what they’re allowed to ask for.”

“It can help you out, too. Adoption helped me get my apartment and helped me get back on my feet. I helped them and, in return, it helped me at the same time.”

“The most amazing part of it was knowing that you have control. When I had both babies, they were mine first. I held them, I counted their toes, I took 10 minutes or however long I wanted to smell them, to kiss them, to say goodbye to them. I got to hand them to their moms. That was the most amazing thing in the world — to see this woman become a mom for the first time… You literally have given someone the biggest gift you could possibly give.”

“When I met my biological mother, she was very upset that I wouldn’t call her ‘mom.’ My birth mother would also say things like, ‘Well, I’m your real mom and they’re not your real family.’ Those things should also never be said…  I think that birth mothers should understand that you are not that child’s mom; you are that child’s ‘tummy mom.’ You are the woman who cared enough to give birth. My biological mother gave me life, but my adopted mom made my life; she is my mom.”

Her Advice for Adoptive Parents

Jocelyn’s unique perspective as both an adoptee and a birth mother has taught her a lot about the adoption process. She believes certain steps by adoptive parents can make the journey a lot easier for all involved.

Below, she shares her suggestions for adoptive parents at all stages of the adoption process.

“When I had Matthew, the adoptive family gathered around and I was done. They didn’t talk to me, they didn’t say goodbye to me — they were done with me. With Jonathan, the family brought me a basket, saying ‘Thank you for everything that you’ve done. You’re wonderful, he’s beautiful, we couldn’t have asked for anything better.’ It made me feel so good, instead of like I was just done: ‘We got him; let’s go.’ I think that the adoptive parents need to understand that it’s hard for the birth mother.”

“The adoptive parents are getting a baby — love and a child for the rest of their lives — and if all I’m asking for is pictures, it shouldn’t be a difficult thing… Getting pictures right after birth was a godsend. I had something to look at, to see that he was doing good.”

“When I wanted to find my biological family, it was mainly because I wanted to know who I was. It was in no way because I was upset about who adopted me or because they weren’t enough. When the child does want to find their biological family, it has nothing to do with the adoptive family. It’s because you have this piece of you that is missing and you want to know what it is.”

“I grew up in a family where my adoption was pretty much told to everybody. My cousins constantly told me I didn’t belong, that I wasn’t really their family, and I was always treated as an outsider by the rest of my adoptive family. I think adoptive parents need to have a conversation with their entire family about what it’s like… Adoptive families should know that those things should never be said.”

*Names have been changed to protect Jocelyn’s sons’ privacy.