Same-sex parents and gay individuals already have to hear more than their fair share of weird questions and comments, as if they’re the keeper of knowledge for all things LGBTQ+. 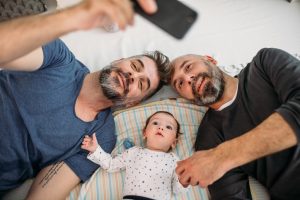 As an adoptive parent, you’ll also likely receive some common “gay adoption” questions on top of that. Your family is more “visible” than some other adoptive families, so you’re an easy target for people’s curiosity.

It can be frustrating when others focus on minute differences instead of the overwhelming normalcy of your family. And some of the questions can be downright insensitive.

Which of these eight things have you heard?

Opposite-sex parents are sometimes convinced that your child will somehow get his or her own parents mixed up if they don’t have the opposite-sex parental titles of “Mom and Dad.” Maybe you’re “Dad and Papa,” or you’re both “Mommy” — whatever you answer to, your child knows who to ask when they want to get their way, just like every family!

2. “So who’s more The Mom and which of you is more of The Dad in your family?”

For one thing, it’s super weird that people try to put old-fashioned gender roles onto any relationship. It’s 2020.

You and your spouse are equal parts “mom” and “dad” for your child. There are plenty of single parents out there playing both roles, and LGBT couples are no different! A child’s doesn’t need a strict “mom” and “dad” figure to survive; they just need as many people as possible to love them.

3. “Would you ever want ‘your own’ kids through a surrogate?”

Your kids are your own, no matter how they came to be a part of your family. If you did decide to have more children, this time through surrogacy, they’d be just as much your kids as their older siblings.

Implying that biological is better is insulting to any family. Additionally, choosing between surrogacy and adoption is a personal choice and one that every parent makes on their own. Your family, regardless of whether or not you share biological ties, is just as “real” as any other. Anyone that suggests otherwise has a lot to learn about parenthood.

4. “Which one of you is her biological mom/dad?”

People will make plenty of assumptions about how your family was created. IVF, stepparent adoption or surrogacy might have been their first thoughts. But just because you have kids doesn’t mean you’re biologically connected — that’s true for opposite-sex couples, too!

Assumptions are annoying. It’s strange how people can’t seem to resist the urge to comment on how much a child does or doesn’t looks like his dads. Curious strangers would be better off politely asking how your family came together, or better still — just complimenting you on having a beautiful family and calling it a day.

Even if your child was adopted domestically and/or you are of the same race, you’ll likely hear this from time to time. Same-sex parents are a little more “visible” as adoptive families, so people blurt out a lot of their adoption curiosity to LGBT families.

But this question is hard not to roll your eyes at. It makes it sound like you got your child from The Baby Store. Maybe they want to hear that you selflessly “rescued” your poor, sad baby from someplace terrible. Whatever their motives, people always seem a little disappointed when you tell them you and your children are visiting from Indiana or whatever.

6. “Won’t she be confused by a birth father if she has two mommies?”

People often (wrongly) assume that open adoption might somehow confuse a child. That’s not the case at all. Your child loves his or her birth parents, just not in the same way they love you and your spouse.

Even if your child is too young to understand his or her birth parents’ roles in great detail, or too young to know much about how babies are made, for now they will simply understand that birth mothers and fathers are special. The genders of the people who love (and are loved by) children don’t matter to them — and shouldn’t matter to anyone else.

Children can have lots of strong role models of different genders in their lives — who said it had to be their parents? All children should have role models of different races, genders, professions and ideologies to look up to! It’ll expand their worldview and make them a well-rounded person. These trusted people could be their teachers, family friends, religious leaders, family members and more.

8. “Won’t Mother’s/Father’s Day be confusing for them?”

No, children aren’t confused. Single-parent families handle this just fine, and so do families with same-sex parents. Kids can make two Father’s Day cards at school, and then they can make a card for their birth mother on Mother’s Day, if they like. Or, they can make their parents a card for both holidays, because same-sex parents, like single parents, pull double duty in many ways.

Birth parents play a special role in an adopted child’s life, even though it’s not a parental role. So Mother’s Day and Father’s Day can often be times to honor and celebrate them. In addition to their birth parents, children will have role models of all genders to look up to, like we mentioned before. There’s no loss of a mother or father figure when a child is raised by same-sex parents — there are just more people involved in that child’s life who love him or her.

What are some of the things people have said to you as an LGBT family created through adoption? Let us know in the comments!