Scott and Sue aren’t your typical adoptive parents. When they first got married, Scott was divorced with two biological children in their late teens. Sue was a British national and Dubai resident. The couple had been together for years, traveling around the world, and had been married for less than two years when they first came to American Adoptions. 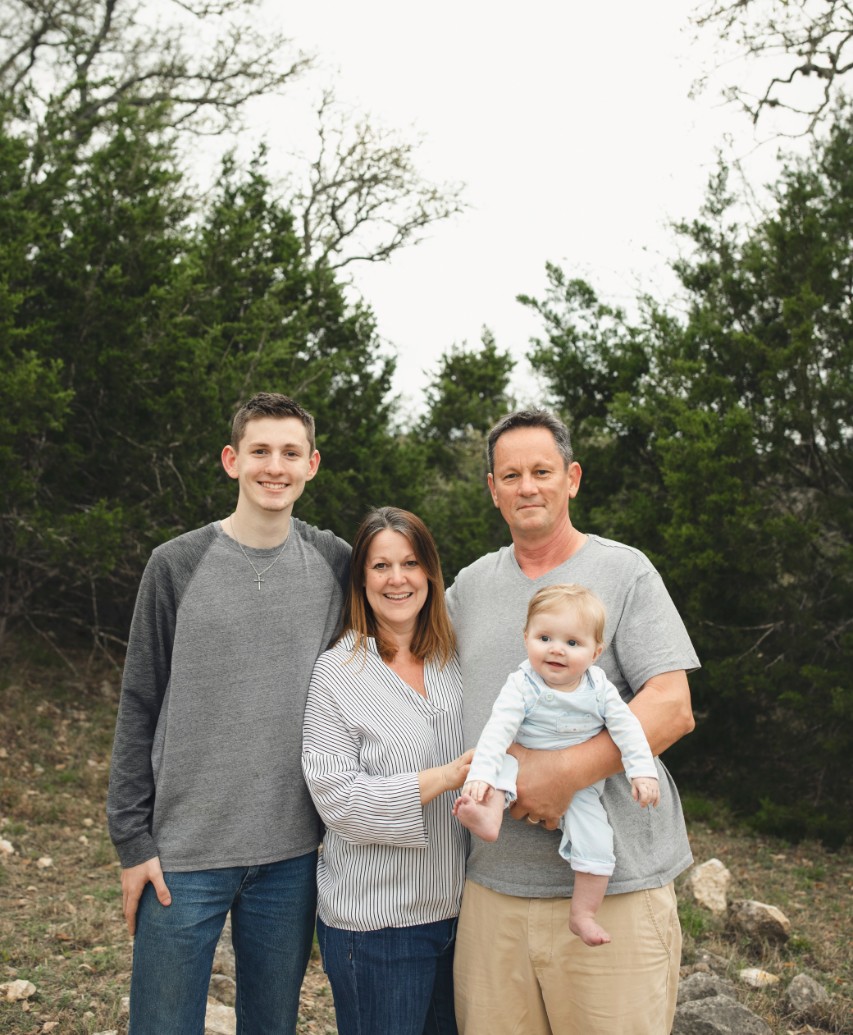 But, like all adoptive parents, they had one deep desire: to start a family together. And, as they approached their 50s, adoption was the best way to do that.

“I had always wanted to adopt, but life got busy, and it kind of took a back seat to life after a while,” Scott says. “So, when Sue discussed it, it became an opportunity to relight that desire to bring someone else into the family who wasn’t necessarily biologically related.”

They knew it would be tricky. Their life was traveling back and forth to Dubai from Texas; how would adoption work? Would a prospective birth mother want to choose a family like theirs?

But, with American Adoptions by their side, they had nothing to worry about. Their newest family member was one long wait away.

Standing Out from the Crowd

Scott and Sue knew their adoption options would be limited, due to Scott’s age, the short length of their marriage and their constant traveling for work and family.

After six months of research, they found an agency that would work with all those variables. So, they started the journey with American Adoptions.

Putting together their family profiles was hard, Scott admits. Unlike the other profiles they viewed, they couldn’t easily film family and friends across the world. How could they communicate to a prospective birth parent the unique circumstances of their family and lifestyle?

“Our story is just so, kind of, remarkably different from everyone else’s that we decided we should just go ahead and tell our story — that if we’d appeal to somebody, that they would know what was in store,” Scott says. “We definitely thought we were not like anyone else, and it might be a challenge to get us matched.”

They knew their Adoption Planning Questionnaire preferences would be a factor, so they worked closely with their adoptive family specialist Melanie to determine what worked for their family. While they started with fairly open racial preferences, they opened up further after they waited for six months with no call.

They also found themselves opening up to more open adoption contact as they got deeper in the process and better understood the benefits for all involved.

“As we went through the learning and the waiting and growing, it became something that we were much more comfortable with — that we think is incredibly important for it to be open,” Sue says.

And, with the advent of modern technology, Scott and Sue were ready to use whatever tools they had — phone calls and texts, emails, video-chats — to create the kind of relationship a prospective birth mother may like.

A Long Wait — and a Quick Turnaround

As Scott and Sue waited for their adoption opportunity call, they tried to plan for the uncertainty of the moment. They didn’t know where they would be living — Texas or Dubai — and getting to a prospective birth mother within 24 hours may have been impossible. Fortunately, their adoption specialist allowed them some flexibility and helped them plan for this situation.

As it would happen, the couple was living in Texas, just hours away from Scott returning to Dubai, when they finally got the call. Almost a year after going active, a prospective birth mother in Colorado had chosen them to be parents for her son. Scott and Sue quickly changed their itinerary, heading west to meet the new member of their family.

They had decided together not to prepare a nursery prior to receiving an opportunity — but that left them with no baby supplies. A few quick trips to Target helped them gather what they needed before jumping on the plane.

“It was funny, because when I was at the checkout, the cashier tentatively said, ‘Do you need a gift receipt for any of this?’ as if I was past the age of fathering children,” Scott remembers.

“We did get [more comments like] that on the way back from Colorado, actually,” Sue adds.

‘Immediately Part of the Family’

Scott and Sue met the prospective birth mother in the hospital. And, after meeting them, she made a few changes to her birth plan: She wanted Sue in the room with her during delivery.

“I’m not a crier, but I was very, very emotional,” Sue says. “It is quite a surreal experience. You are really holding yourself back knowing that this could be disrupted.”

Colorado adoption laws added a bit more stress. Due to a complicated birth father situation and the state’s legal requirements, there was a degree of uncertainty in the placement, even after their son Ethan was placed in their arms.

Add to that the ICPC wait, and Scott and Sue remember the first few weeks being much harder than they imagined.

“It can’t be underestimated how long 10 days feels when you’re with a baby in a hotel room,” Sue says. “Not that we weren’t prepared for it, but we hadn’t really gotten our heads around when they say it could take 10 days — ours took 11 days.

What they’d suggest to other adoptive parents? Book a short-term rental, like an apartment or Airbnb, and a one-way plane ticket there — so you can come back whenever you’re ready.

When they finally made their way back to Texas with Ethan, his grandparents from the U.K. and U.S. excitedly met their new family member. The older kids came down to meet their new sibling, and Ethan was an immediate part of the family, Sue remembers.

“From not having children — obviously Scott has two already — but for me, it was an instantaneous, amazing experience,” Sue says.

“Unless it happens to you, you don’t know how it changes your life,” Scott adds. “I kept telling Sue, ‘We’re on our way to Colorado to pick up a baby; this is going to change your life in ways you don’t even yet understand.’”

Ethan quickly became a world traveler, just like his parents, with a trip to the U.K. to meet extended family members. Because his birth mother had used the couple’s desired name on the original birth certificate, obtaining a passport was easier. She also willingly gave the permission needed for his custody paperwork to be shared, so he could travel with his parents before finalization.

And good thing, too — because Ethan has already been to the U.K., Spain, Germany, Austria, Sri Lanka and the UAE, all by the tender age of 2 years old.

While open adoption contact with Ethan’s birth mom has decreased since his birth, the two families stay in touch through texts and emails. Because his birth mom chose the couple because of their love for travel, there’s even been talk about her meeting them in a foreign country at some point in the future.

In the meantime, Scott and Sue are enjoying their life with their new addition — a natural fit with their family.

“In the back of my head, I wondered, having had biological children, what I was going to feel like toward Ethan,” Scott says. “Sue and I have basically said to each other a few times that he doesn’t ever seem like he was anything but our child. It seems like he’s always been ours… It’s amazing the feeling of having someone in the family that kind of appeared out of nowhere.