When Krystal and Marc announced they were adopting, they were met with excitement — and a little bit of confusion. They were already the parents of three boys — aged 12, 10 and 7 — and people asked them, as Krystal put it, “Are y’all crazy?”

But they had always wanted a big family, and adoption had been on their mind for years, ever since they experienced two miscarriages after their first son was born. When they started working with American Adoptions, they knew their adoption process might be more challenging than the average adoptive parents’. But they stayed positive throughout a year of waiting and an adoption disruption to finally complete their family with a beautiful baby girl named Everly. 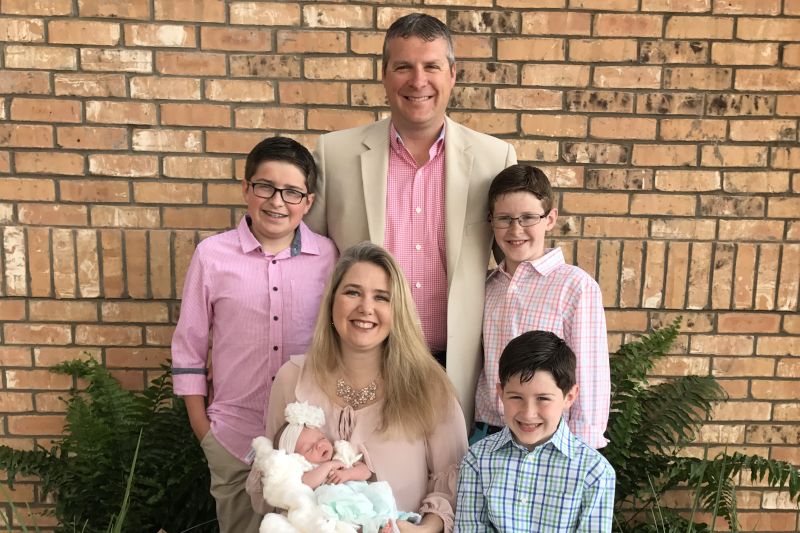 Krystal and Marc were first introduced to American Adoptions through a friend who had adopted a son 10 years earlier. However, when they looked at the website, they were concerned to see that American Adoptions has a general policy of only working with families with two or fewer children.

Ever the optimists, they went ahead and contacted the agency. After submitting an exception application, they were accepted into the agency and were ready to start the adoption process.  However, their adoptive family specialist was realistic with them from the beginning — their adoption process might be more complicated because of their family situation.

“They didn’t try to sugarcoat anything, and I don’t mean that in a bad way,” Krystal says. “They let us know up front, ‘You guys already have three biological children. Some birth moms are not going to want that for their baby. But some are, so we just want to let you guys know our average wait times are 4-12 months, but be expected that you guys could be on the longer side of that or over that just because y’all already have three kids.’

“And we were like, ‘Okay. We can understand that.’”

The wait was hard, especially with their unique circumstances. While having children already made part of the wait easier, it also brought on some questions from people who didn’t understand their decision to adopt.

“We always get that question, ‘You already have three children; why do you want another one?’” Marc says. “Then you see posts from parents who are in the same group as you are and are going through the same steps and, unfortunately, not everybody goes through the same thing. There’s going to be some negative comments. You can’t let get it to you either, because they’re not in the same place you are and they don’t know your story.”

Five months went by before Krystal and Marc received the call they were waiting for. During the wait, they reached out at least monthly to their adoptive family specialist Lara, who constantly updated them on how many birth mothers had viewed their profile. For Krystal, this information was invaluable.

“Adoption is a burden on families, but to have an agency that does communicate and does let you know that you’re being shown and prays for you along the way and is there supporting you along the way — that was huge for us.”

A Disruption — and an Opportunity

The evening after the prospective birth mother was admitted to the hospital, American Adoptions called Krystal and Marc to tell them she had changed her mind.

“That was so heartbreaking to say the least,” Krystal said. “I was thankful we had not seen the baby, because I think that would have been a lot tougher. We were definitely heartbroken, but we knew that this is God’s plan.”

“It was crazy how God put the brakes on that opportunity for us and just opened them for someone else once we got matched with the baby in Arizona. After the adoption was interrupted, we struggled with that, wondering ‘Why did that happen?’” Marc says. “We started putting it all together; that was not our child. That was for our friends to adopt.”

Despite the whirlwind of emotions with the adoption disruption, Krystal and Marc decided to go active again the very same night that they got the bad news.

“I think the wait after a failed match or placement is two times as hard, because you feel like you can see the end result and you can see that it can be amazing and then you’re like, ‘Okay, we’re back at square one,’” Krystal says.

Another five months later, Krystal was running errands and had forgotten she’d left her phone on silent. As she was waiting to pick her kids up from school, she noticed her phone was vibrating. It was Marc.

“He’s like, ‘Guess what? I just got the call.’ And I’m like, ‘No, you did not,’” Krystal remembers. “I was so mad at him; I thought he was lying to me, because they would call me first before they would call him. 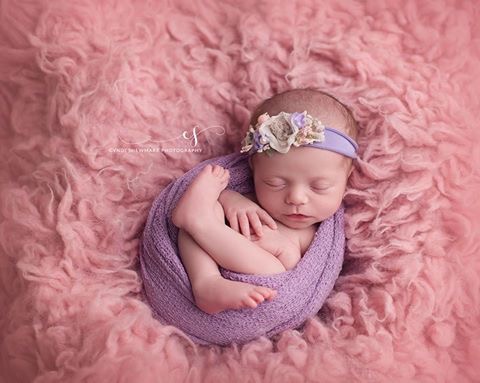 “Then he starts telling me these details, and I was like, ‘What are you doing?’ And he was like, ‘American tried calling you — check your phone.’ So I picked up my phone and looked at it and was like, ’Oh my gosh, I missed the call!’”

It was the happy news they had been waiting for — not only had they been matched again but with a woman who was expecting a baby girl. After surprising their sons at home with the news (and recording it for future safekeeping), they found themselves preparing to go to California on three-day’s notice when the expectant mother was scheduled to be induced.

Once there, they were able to meet the prospective birth mother and her mom for the first time. She had originally wanted a closed adoption but, once she met Krystal and Marc, she changed her mind.

“The conversation just went so well with them, and I think it helped to ease their angst once they met us,” Marc said.

After her induction was cancelled, Krystal and Marc flew back home to wait for the birth mom to naturally deliver. Before they knew it, they were frantically looking for flights and driving across Texas to the airport as their daughter was being born thousands of miles away.

Krystal and Marc arrived that next morning to meet their daughter, Everly. The birth mother had not yet seen or held her baby; she had waited until Krystal and Marc got to the hospital. Out of respect, Krystal offered that her birth mom be the first to hold her.

“I handed Everly to her and she held her for maybe a minute and a half, and then she looked at me and said, ‘Here’s your daughter.’ And, of course, I lost it at that point.

“I remember looking at Everly the first time and looking at Marc with tears streaming down my face, thinking, ‘I understand why it did not work out in Arizona. This is our child, this is our baby,’” Krystal says. “If I had to go through a hundred failed placements to get the child we have now, I would absolutely do it.” 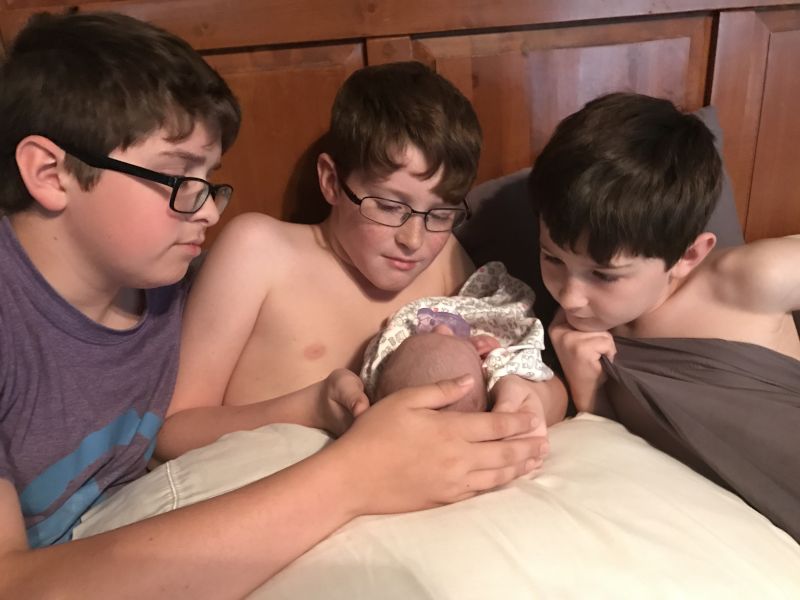 Before Krystal and Marc left California with their new baby, they gave the birth mother a bracelet with her daughter’s birthstone — aquamarine for March. Because it lacked any obvious adoption symbols, they felt it was a way for her to keep her daughter close without having to answer probing questions she was uncomfortable with. It was the only time Everly’s birth mother cried throughout the entire hospital process.

Today, Krystal and Marc are adjusting to life with their new baby girl with plenty of help from their sons. They absolutely adore their little sister, constantly wanting to be with her. They even asked if she could sleep in their beds for her first night at home.

“They argue about who’s going to hold her, who gets to sit by her in the car, who’s going to give her her bottle. They’ll throw the diapers away, but that’s as far as they’ve gotten,” Krystal laughs.

For Marc and Krystal, having an agency that takes care of all the legal paperwork has been an immense help in letting them adjust to life with their new baby. Right now, they’re just focusing on little Everly and the life-changing choice her birth mother made.

“I just can’t even put into words the gratitude we felt for her and knowing the amount of love she had to have for her child to be able to make that decision and know that she couldn’t provide the life that she wanted her child to have,” Krystal said.