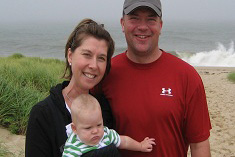 Scott and Tristen are the ideal couple to become parents. They have been married for 13 years; live near the New Jersey Shore; love to travel and play games together, ranging from board games to poker; attend large family holiday gatherings; and both enjoy Tristen’s cooking while poking fun at Scott’s. They are easygoing, often joking around, and clearly love being with each other.

Needless to say, it did not take them long to get matched. In fact, it took less than a month.

The match was with a birth mother who lived in Texas and wanted an open adoption. Scott and Tristen’s adoptive family profile exhibited all the qualities she was looking for and chose them. But soon after she matched with them, she found a local Texas family who were also seeking an open adoption. She figured she would have more contact with her child in Texas, so she backed out of the match with Scott and Tristen as well as with American Adoptions.

The hopeful adoptive parents were deeply saddened by the news, but Scott and his wife remained hopeful and decided not to take a break by going inactive.

“We didn’t take our names off the list or said we needed more time because I felt if we did that, would we ever get back on the saddle? We had to keep going,” he says.

Scott and Tristen’s fortitude paid off; they received a phone call on Feb. 4, almost exactly one month after they learned of the disruption. The phone call was from American Adoptions again, this time regarding a match with a birth mother in Kansas, mere minutes from American Adoptions’ national offices. Jennie, the birth mother, was due in March.

The adoptive couple tried to contain their excitement for the remainder of February, and then the day had finally come to begin the trek west toward Kansas. However, that day fell during torrential rain and flooding in New Jersey, complete with a power line on fire outside of Scott and Tristen’s home. They were delayed but still made it to Kansas before Jennie’s due date. There was another problem though; Jennie’s doctor was thinking about inducing her the following week. 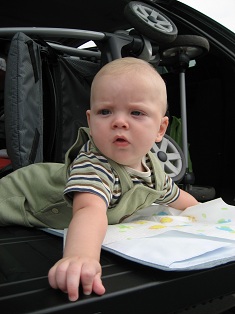 “We thought, next week? What are we going to do until then?” Tristen says.

Luckily, the adoptive couple didn’t have to wait long.

“On St. Patrick’s Day we went to Lawrence (Kansas) to see the parade,” Tristen says. “As we were coming back from Lawrence, we got the call that they were going to admit Jennie in the morning and they were going to have the scheduled C-section.”

Scott and Tristen arrived at the hospital at 8 a.m. that morning and by 10:30 a.m., they were new parents. Tristen immediately cried, and Scott was speechless after what the previous two months had finally resulted in — the birth of his son.

“He was just so beautiful,” Scott says. “It really was just amazing. Here he is, finally. He was not this concept, but this little guy that we now have to give a bath too. It was actually one of those things that is really hard to put into words.”

Instantly, the disruption was a distant memory.

Because the birth took place in Kansas, they were able to physically work with American Adoptions’ Alissa Shull, the birth parent specialist for the adoption. Both Scott and Tristen believe they very well may not be parents if it wasn’t for Alissa’s hard work and caring personality.

“I couldn’t imagine having gone through this thing without her; she was that invaluable,” Scott says. “The time she spent with Jen making her feel comfortable with her decision, and the amount of care she had for her, for us, and for Garrett was incredible. She will always have a place in our hearts. You really can’t tell our story without mentioning her.  ”

Little did Scott and Tristen know until days later that this adoption was Alissa’s first private domestic adoption.

“We hope we will stay in her mind forever too, being her first,” Tristen says.

Living The Good Life with Garrett

Today, Scott and Tristen regularly keep in touch with Jennie via e-mail. Scott is the stay-at-home father, which is one of the many reasons Jennie picked Tristen and him as parents, because she really wanted a strong father figure in her son’s life — something she lacked in her own. For now Tristen is the bread winner of the family and is excited to get back to cooking family meals and continuing her passion for photography on her growing family. 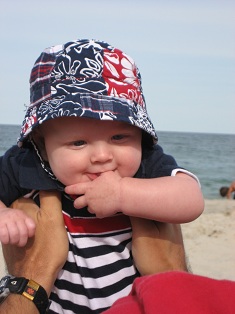 A few weeks ago, Garrett rolled over on his own for the first time while Tristen was at work, which she says she was a little disappointed that she missed. However, he made up for it by rolling over for her three times before she went to work a few days later.

Tristen says Garrett is perfect and she wouldn’t change a single thing about their adoption, including the disruption. As difficult as it seemed at the time, it ultimately played a role in them receiving Garrett as their son.

“I truly believe that things happen for a reason and Garrett was meant to be with us,” Tristen says. “I think if you go into this close-minded that it has to be a certain way, you may be disappointed and you may miss out on a great opportunity.”

Scott also believes that their adoption process played out the way it did for a reason. All that matters now is Garrett is his and Tristen’s son, and everything that came before it no longer matters.

“It is true what they say, everything was leading us to him and him to us,” Scott says. “We don’t look back on that one way or the other, other than it was just one more step along the way until we met Garrett.”