Twins Is What They Do - One Family's Journey into Adopting Multiples 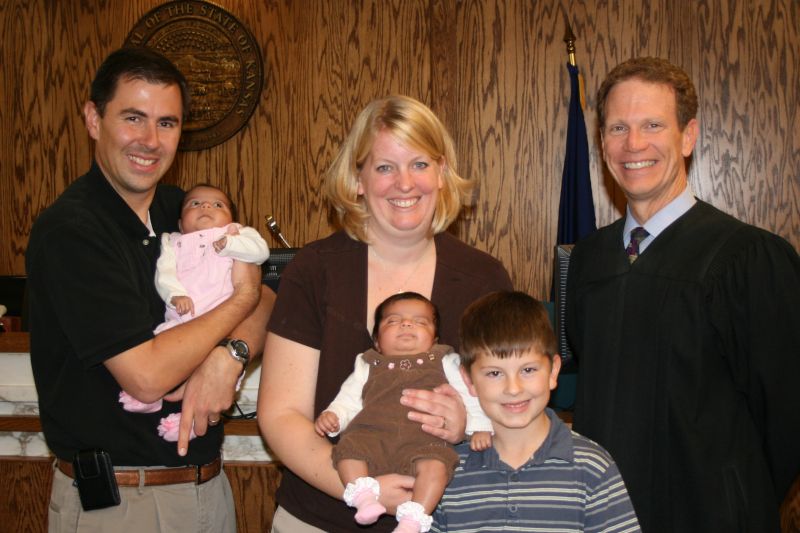 High school sweethearts Dan and Dawn loved to travel and cherished the opportunity to expose their son Matthew to new places and experiences. But something was missing.

“I really just wanted to be a mom. Not that I wasn’t still a mom to Matthew, but I wanted him to experience having a baby in the house and loving another person in our family,” Dawn says.

Matthew, their first child, was long-awaited, and though Dawn and Dan pursued fertility treatments for a second child, they quickly turned to adoption to grow their family, calling the decision “amazingly easy.”

They came to American Adoptions at the recommendation of a friend when Matthew was 5 years old. After overcoming their reservations and coping with a wait time, Dan and Dawn were elated to receive a match call about a year after their activation: for a set of twins in Ohio.

After the twins were born, Dan and Dawn introduced them to Matthew and had custody of the infants for about a week when the call came. The birth father wanted to raise his children and had filed with the state to do so. This meant a custody battle ahead for Dan and Dawn and no promise that they would become the parents of the twins. Had the state not been behind on case files, Dan and Dawn might never have even made the trip to Ohio.

“I just couldn’t even talk,” Dawn says. “I was just clutching those babies and saying, ‘No, no, no.’ That was a bad moment.”

Dan asked for the twins to be picked up immediately, and the couple spent the summer healing from the adoption disruption. Eventually, with the support of family members and friends, Dan and Dawn put themselves back on the active list with American Adoptions.

“We had a little philosophy with our son. If he falls off his bike, you tell him to get back on, and it was a little of the same. We were all right. It was not ideal, but waiting didn’t make it any better. So, we signed back up,” Dan says.

The couple was especially relieved when Babies “R” Us graciously took back many of their baby items, some without boxes or receipts.

“Of course, we ended up needing it all three months later anyway,” Dawn says.

The first call came on a Sunday afternoon in August 2010 nearly three months after the first match. A pair of twin girls had been born in New York City. Dawn was dumbfounded. 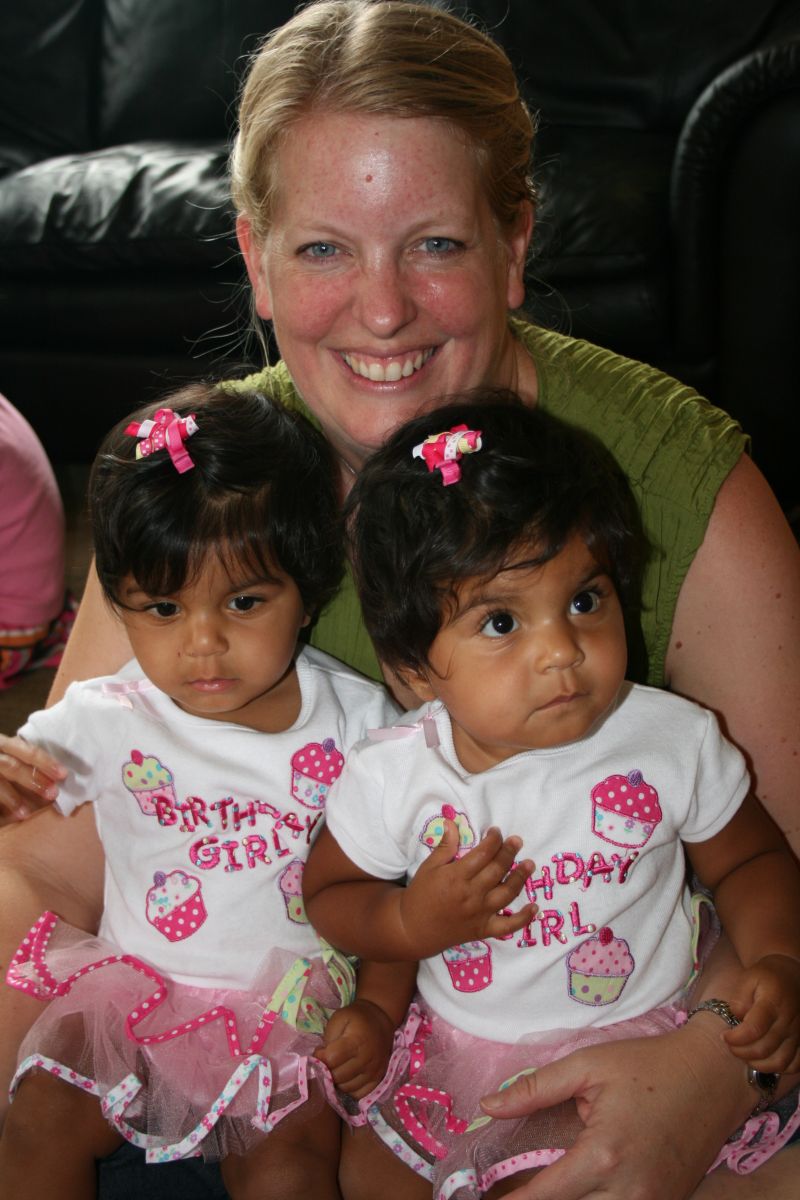 “They told us this kind of thing could never happen,” she says.

But at nearly midnight that night, the birth mother specialist called back to say the birth parents changed their minds.

“I almost threw up,” Dawn says.

In the morning, Dawn drove Matthew to school and broke the news to him. The then seven-year-old realized the family might not get twins again, and exclaimed, “But, Mom, twins is what we do!”

Dawn promised they would still eventually adopt, “although we had toyed with the idea of taking twins off, since it was bad karma,” Dan says.

“That never happens. Once they change their minds, they’re done,” she said, trying not to get Dawn’s hopes up but leaving the door open.

It wasn’t until Tuesday night that Dan and Dawn received the call that the adoption was official. The twins had been signed right over to them. Dan and Dawn carried their sleeping son to a neighbor’s house, packed until the wee hours of the night and hopped on a plane at 7 a.m. Wednesday. They spent the plane ride picking names for their daughters.

When Dan and Dawn walked right into a bustling NICU in Jamaica, Queens, they first laid eyes on Lily, who was ready to be discharged. Amy, born smaller than her sister, stayed in the hospital for a couple of weeks. The hospital staff bundled Lily up in her car seat, gave the couple a quick run-down of the girls’ birth and medical history and briefly showed them Amy. 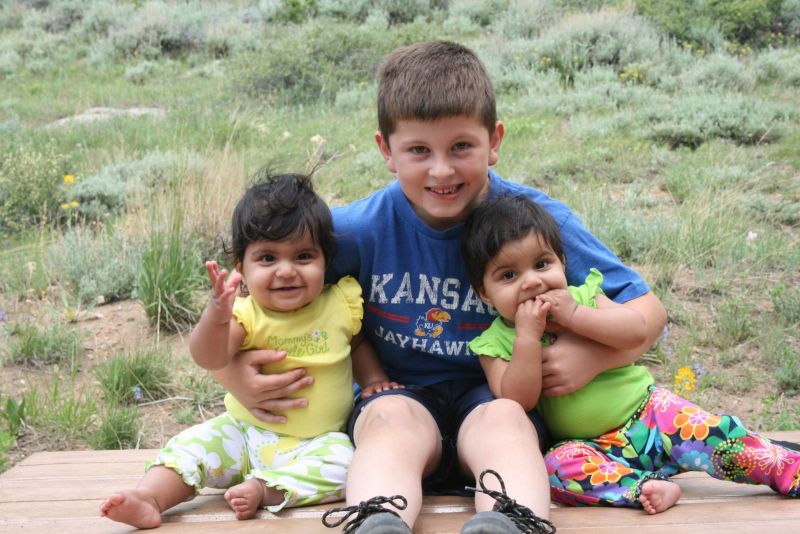 “We didn’t even hold her till we got back to the hotel because they put her in the car seat for us,” Dawn says, “and we’re sitting on the bed with the car seat, and we’re like, OK.”

Two weeks went by. Matthew flew to New York and was stunned at how small his baby sister Lily was. But the couple heard very little about Amy, who was still in the NICU. Finally, Amy was discharged on the Friday before Labor Day weekend amid the winds and rains brought by Hurricane Earl.

Dawn made a point to speak up at the hospital to learn how to breastfeed Amy but was pleasantly surprised when she took her bottle perfectly.

“She had this look on her face like, ‘Oh, there you are. I’ve been waiting for you,’” Dawn says.

“Just managing the two at once, what a blessing,” Dawn says, “but what a handful.”

The couple learned that one person could feed both girls at once, but only if they were in their car seats. For those first couple months, Dan took the early night shift from 8 p.m. to 11 p.m. Meanwhile, Dawn, often going to bed before Matthew, took the late shift from midnight on.

Matthew bonded quickly with his sisters. Amy calls him “Bafoo” and claps when he enters the room. Lily points to his picture while he’s at school as if to say, “How soon is he going to get here?”

“He completely adores them,” Dawn says. “And they laugh at him all the time.”

Amy and Lily are Indian-American, which often prompts strangers to ask where Dan and Dawn got them. Though Dan and Dawn have been consumed with surviving the first year as parents to twins and a vivacious 8-year-old, they are looking forward to learning more about Indian culture together and have resources nearby in friends and neighbors.

“I guess I wish I’d had the opportunity to tell our birth mother thank you, having seen our first birth mother Jane go through it,” Dawn says. “No matter how much you want the baby or don’t want the baby, it’s not an easy decision. When it came time to let go, it was so hard. I felt this kinship to her. And it was the happiest day for us, and it was the hardest day for her.

“I want the birth mothers out there to know that we love them so much. We wouldn’t have loved them more if I had carried them.”

*The names of the birth parents have been changed to maintain confidentiality.