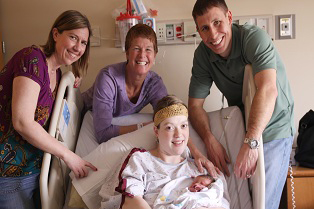 Jim and Stacey get a lot of interesting looks from bystanders they encounter on sidewalks or on the bike path through the park behind their house.

Passersby often first notice the stroller, with their 5-month old son, Dylan, smiling back at them. Then they notice Stacey, who is clearly pregnant and probably due in mere months, but that’s impossible. Right?

That’s what Jim and Stacey thought as well — impossible.

Jim saw the emotional and physical toll the infertility treatments were having on his wife, and after one final attempt at in vitro fertilization, the two had had enough. They decided to get away and took a road trip from their home in Columbus to Cincinnati. During the car ride, Stacey asked her husband a question that would change their lives forever.

“Jim, what are your feelings about adoption?”

Jim was fully on board – he’d do anything to start his family while easing his wife’s suffering.

The couple immediately began doing research online and soon became active with American Adoptions in May. Stacey’s dreams of becoming a mother sooner than later seemed to be realized as they were matched just three months later. The birth mother lived in Virginia and was due in November.

The match began well. Jim and Stacey drove to Virginia to visit her and her boyfriend, which Jim says was a very good experience. E-mail contact remained frequent, at least once a week.

But then, the couple began to get an uneasy feeling about the match. E-mails all of the sudden ceased on the birth mother’s end. In October, she no-showed a conference call. The following Monday she decided she didn’t want Jim and Stacey to travel to Virginia until later, and didn’t want anyone in the hospital room once she had the baby — a complete 180 from her original wishes.

“We both got the feeling that she was being pretty wishy washy about it,” Stacey says. “Our trust just wasn’t there, and we just didn’t feel comfortable going forward with it. So the next day we called the agency and said, ‘This isn’t normal, but we’d like to back out,’ because deep down we already knew she had decided to parent her child.”

On November 3, 2009, Jim and Stacey found themselves back at square one, devastated. Like before, they needed to get away.

“We literally sat on the couch the day after everything had fallen through, looked on the internet, and two days later we were on a plane to Mexico. We needed to do something spontaneous,” he says.

Just a day after returning home from the retreat, Stacey received a call on her cell phone from American Adoptions, but she missed the call. The same thing happened the following day.

They figured the news probably wasn’t about a match since no voice mail was left, but they sent an e-mail to their Adoptive Family Specialist, Angie, just to make sure. She immediately responded and told them of a potential match with a birth mother in Kansas named Zwee. 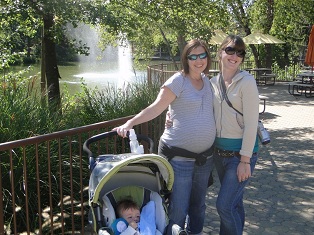 “It really is real? I’m so excited!” Stacey remember saying.

A month later, the couple took a trip to visit Jim’s mother, and Stacey felt ill the entire time there. It wasn’t until later when they would realize what was making her feel this way — a realization that would change their family forever.

Soon after the trip to Jim’s mother’s, the couple made the drive west to Kansas to visit Zwee and her family. They spent an entire Saturday together and connected instantly. They gave Zwee a scrapbook consisting of pictures and items about their family life, and letters from their friends and family that further explained why Jim and Stacey would make such great parents. Jim says that Zwee and her family seemed touched.

They returned home to await her scheduled C-section on April 12, but only two weeks later, on April 2, Stacey got a phone call from Jim while at work.

“We are going to Kansas,” Jim told her.

“No, he has already been born.”

Stacey was floored, literally. She fell out of her chair.

“The people I was sitting around laughed, but it was pretty awesome having that adrenaline rush,” Stacey says. “We ran home, packed, hopped in the car, and started driving in less than two hours.”

“Go ahead and hold your son,” Zwee’s mother Trish told Stacey as she was handed her baby boy, Dylan.

“That was just such an amazing thing to hear her mom say, and I cried,” Stacey says. “This whole feeling of peace came over me. It was really amazing.”

Based on the pre-placement visit and all of the contact the two parties had with one another, Zwee and her family were confident that Jim and Stacey would be the best parents for her son; so much in fact that she signed the papers before the new parents even arrived at the Kansas hospital.

“There was absolutely no stress in the room because there wasn’t any wondering about if she was going to have second thoughts,” Jim says.

Any joy that Jim and Stacey lost years before had not only returned, but it surpassed any happiness they had ever felt in their lives.

And now, Jim and Stacey have a special relationship with Zwee and her family, one they hadn’t anticipated on going into the adoption process. Stacey has already begun making the first edition of a yearly tradition of dual scrapbooks: one for Zwee and one for Dylan, so they always have a keepsake that only the two share with one another. 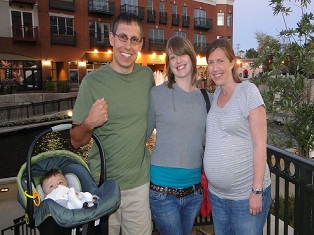 Furthermore, they remain so close that Zwee already visited Columbus this fall — a tradition that will surely continue.

Before they knew it, though, Jim and Stacey found themselves with another member of their family — again, completely by surprise.

The sickness Stacey felt at Jim’s mother’s led to four pregnancy tests and a doctor’s visit concluding that a baby girl was in their near future and due on November 3 — exactly one year after their first adoption disruption.

The birth of their baby girl, however, will never diminish the love they have for their adopted son Dylan. Jim and Stacey believe he was always meant to be their baby boy, and they already love him equally as much as any other biological children they may have.

“I really do think Dylan was always supposed to be our son; it was all part of God’s plan,” Stacey says. “The thing I’ve always said about this whole adoption is it was all based on love. When Zwee was leaving the hospital, as I looked at Dylan for the first time after she had gone, I said, ‘Do you know how loved you are?’ because there are so many people who love him.”

And soon there will be an additional person who will adore Dylan perhaps more than anyone – his baby sister.