When the Timing is Unexpected - One Family's Last-Minute Adoption Story

Within a month of dating, Andy and Nancy knew they were right for one another. In fact, they even began discussing building a family together. So, years later, after trying to have a child on their own, the decision to adopt was easy for them. The challenging part was just figuring out how to do it.

Andy logged onto American Adoptions’ web site and, after plenty of research, decided that the agency was best for his family. After activating, they waited patiently for six months. Then, on the Monday afternoon of November 28, 2005, while Andy was at work, he received a phone call telling him of a baby girl scheduled to be born in Florida in just four days.

“I was extremely excited, but I tried to stay composed because just getting a phone call doesn’t mean things are final,” Andy says. “I was trying to be composed while being crazy excited all at the same time.”

Because the adoptive couple had decided not to worry about becoming matched and not to think about an adoption until they actually received the match call, they were slightly unprepared when the time came. Certainly, they were not expecting to become new parents in less than one week.

They had only a few days to pack up and drive from New Jersey all the way to Florida to meet their baby.

“We didn’t have a car seat, a stroller and many other things for the baby,” Nancy says. “After it settled in that we were doing this, it became absolute panic, so we quickly packed up and headed south.”

Becoming Parents for the First Time 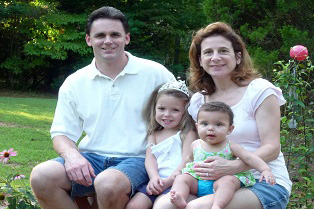 Andy and Nancy arrived at the Florida hospital that Friday morning. However, the birth mother’s social worker wasn’t present and the paperwork wasn’t in order, so the hospital workers didn’t know who they were.

While American Adoptions worked to get everything straightened out, Andy and Nancy went to lunch. They had several names in mind for their new baby, but none of them felt right. Something then occurred to them: If they took the first two letters of each of their first names, it spelled “Anna.”

Soon after, their phone rang — a hospital worker telling them they had been cleared. Andy and Nancy rushed to the hospital, into the nursery and were handed baby Anna.

“There were a lot of tears. Good tears,” Andy says. “It was an amazing thing. You can’t describe a feeling like that.”

Back during Andy and Nancy’s original conversations about family, they both agreed that they wanted more than one child. They wanted to reactivate with American Adoptions as soon as they could.

American Adoptions has a policy, however, that all adoptive families have to wait one year after an adoption before they can activate again

“That was fine because we still had to learn how to raise one baby, let alone two,” Nancy says.

After using that time to move from New Jersey to Georgia, Andy and Nancy reactivated. Six months later, they were matched once again, but Nancy did not have a good feeling about the situation. Just a week later, they were informed that the birth mother decided to raise the child herself.

Nancy and Andy were disappointed, but not devastated.

“To get to the point to be called and to decide to move on with the match, and then to get a call that said it’s not going to happen, of course you are very disappointed.  But you want to make sure not to feel like it is a final situation until it is,” Andy says. “This is someone else’s lives we are participating in, and it is totally out of our control.”

The waiting time was especially tough for Nancy because she always envisioned herself having lots of kids. So, they set a cutoff date. If they weren’t matched by then, they would deactivate with American Adoptions.

“We figured if we didn’t hear anything by the end of 2009, we would be done and be grateful, but we just never got around to telling American Adoptions,” Nancy says.

Fortunately, they didn’t deactivate because on January 12, 2010, Andy received yet another life-changing phone call while at work: American Adoptions. A baby girl was born in California and Andy and Nancy were selected as her adoptive parents. 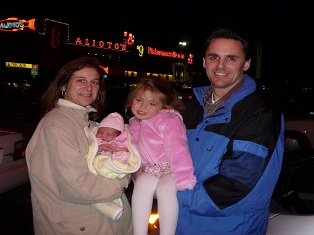 An Overflowing of Support

The baby had been born that morning an hour outside of San Francisco, and Andy and Nancy were stuck at work in Georgia. After being blindsided by the news, Andy’s full schedule of clients that week was now of secondary importance as he and Nancy decided to fly to California the following morning.

Because they were not anticipating another pop-up situation, they once again found themselves overwhelmed. This time however, they received a lot of help. They were given frequent flyer miles from friends; Andy’s company gave him a car to drive; and perhaps most conveniently, the baby was born only an hour away from where Nancy’s brother lives, so they wouldn’t have to stay in a hotel.

“We panicked after getting the call, but the more we talked openly about it, the more things came into place. It was great,” Nancy says. “People pulled for us. Their support was amazing."

Perhaps most coincidental of all, however, was that Andy and Nancy’s self-proclaimed match date had passed, yet they just hadn’t gotten around to picking up the telephone and telling American Adoptions. And their procrastination paid off, as they were blessed with their second daughter, Adellena.

A Family of Four

Adoption is now the foundation of Andy and Nancy’s family. Andy was adopted along with his younger brother, both as infants. Now, Andy himself has two adopted daughters. Their family is so close that no one would ever be able to tell the difference.

They have already begun telling 4-year-old Anna about her adoption and that “a special mommy asked them to be her forever family.” The two sisters already share a very special relationship. When Anna first saw her sister, she was deeply moved, even more so than a normal adolescent, Nancy says. Adellena will often laugh uncontrollably at Anna for no apparent reason, which warms the hearts of their parents — and just serves as another reminder of how perfect their family is.