Not too long ago Mike turned to his wife Silke and said, “Thank God you never got pregnant, because we’d never be in this situation. And I couldn’t imagine my life not being like this.”

Mike and Silke tried to have children off and on for 10 years before turning to adoption. And although they surely wish they could tell their younger selves that it would all work out in the end, they also know that things transpired the way that they were meant to.

The Beginning of the Journey

Mike and Silke met in New York — he, a Jersey boy and competitive motocross racer, and she, a model and band member. Their relationship was borne out of friendship and the discovery of shared family values, and they married in 1995. But creating the rest of their family didn’t turn out to be easy.

“Once we hit about 30, that’s when we started [to try to have kids]. Just kind of, if it happens, it happens. But it never happened,” Mike says. “Then we started going to a fertility clinic. Nobody could give us a real answer. It was all just kind of hocus-pocus.”

Further medical setbacks stood in the way of their plans after 2000. After a botched uterine artery surgery and the removing of Silke’s fibroid tumors, Silke and Mike knew what they should do.

“We thought, 'Let’s take that money where there’s a better chance of us becoming parents,'” Silke says. 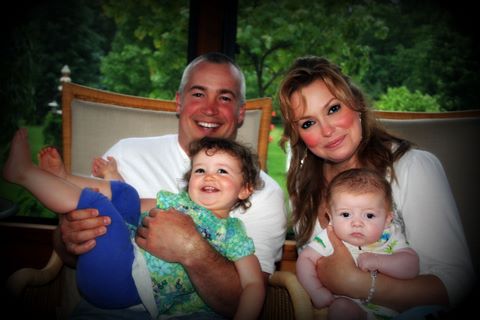 The couple became active with American Adoptions in November of 2008. The day after they were activated, Silke received a call from the agency. She presumed it was for a missing piece of paperwork, but it was really a match call — an unexpected turn for both of them.

“All of a sudden that happens, and it was just absolutely amazing,” he says. “But on the same token, I’m like, ‘Oh my God. I’ve got to get some money together.’”

Silke calls the match with their birth mom surreal.

“We developed a very strong bond before the baby was born. I really opened up to her a lot about my issues and how painful they were,” she says. “And she just really responded to my frankness and candor. And then she let her guard down, and we talked almost every day. And then I became friends with her mom.”

“We’re a little closer to her mom’s age than her,” says Mike with a laugh.

When the call came that their birth mother had gone into labor, Mike and Silke raced through an ice storm to get to the hospital states away. When they arrived, baby girl Sadie had already been born. They met with both birth parents at the hospital. While Silke had already let her guard down long before, the moment Mike signed the papers, the adoption finally became real for him.

“Mike wanted to be my rock up until the last minute, but I tell you, when she signed those papers, I think my husband was crying more than she was,” Silke says.  “It just hit him. He said he could feel how hard it was for her to do that. And so, you know, everyone is consoling my husband.”

During the rest of their time in the hospital, Mike and Silke were welcomed by the extended birth families of their daughter. “We feel like we’re such a part of that family,” Silke says. “I never thought we’d say things like that, but we really do. They’re just such wonderful people.”

After they brought Sadie home, Silke remained in good touch with Sadie’s birth mother and her family during Sadie’s first year through calls and emails.  While the emails from the birth mother slowed down, Silke stayed in close contact with Sadie’s grandmother.

It came as a total surprise then when Silke got a call from American Adoptions that Sadie’s birth mother was pregnant again a year later. The agency wondered if they’d be open to a second adoption.

“I knew right away that we had to do that — they’re siblings,” Silke says.

For Silke and Mike, going back to their birth mother’s hometown for the birth of their son Sawyer felt like visiting family. The extended birth families were especially excited to get to see Sadie again.

“I was the first person to hold Sawyer,” Silke says. “It was such a gift she gave me. In the [delivery] room, it was her mom, me and the doctors, and I got to cut his cord.”

But after he was born, Sawyer’s birth mother began to have second thoughts about the adoption. Silke and Mike retreated to their hotel, heartbroken after having bonded with Sawyer.

“I think it was because she knew how much pain she was going to go through after,” Silke says. “But that said, she also knew that Sadie was well.”

“I think that’s what ultimately allowed her to go through with it,” Mike says. “She knew she was putting brother and sister together. Without that, I don’t think she would have done it.”

Later in the day, the couple went back to the hospital to sign paperwork. And after having the opportunity to get to know their children’s birth mother and her personal life, Silke says, “When those papers are signed, you’re happy, but you honestly feel their pain.”

The couple has found open contact to be very natural.

“Nobody will understand — who hasn’t gone through this yet — how easy it is to be in touch with these people,” Silke says. “You think before you go into the adoption, ‘I don’t think I want the birth parents in their lives.’ For us, anyway, we found that the more open we were, the better it was. All those fears were unfounded, completely unfounded.”

Though contact has slowed between the birth mother and Mike and Silke, the couple does keep in steady touch with her extended family and even anticipate a visit sometime soon. They even want their children to call their biological grandmother “Grandma.”

“I mean, there’s nothing wrong with more people loving them,” Mike says.

So, what’s life like now? Silke enjoys being in the stay-at-home mother role that she and Mike grew up with. Life as parents to Sadie and Sawyer seems to suit them. The couple enjoys seeing personalities develop and share special time with each of their children, never taking anything for granted.

“There’s not a day that goes by that we don’t look at them and think how blessed we are, how lucky we are,” Silke says. “I would have gone through a million of those things.”

“I don’t bother playing the lotto because we’ve already won,” Mike says. “Without a doubt, they are the greatest gifts in our life. It’s so understated to say that. We’d walk through two fires to do that again.”