A New Start - How One Couple Moved on from Infertility

Joe, Carlie and their 11-year-old son, Jalen, were sleeping soundly in a rented Manhattan apartment at 5:30 a.m. when their phone rang.

Carlie quickly snatched the phone and answered it. Indeed, this was it — the phone call they had flown all the way from Kansas to New York City for.

She knew the news would be good, but what she heard was even better. Right then and there, she was proven something she had always thought to be true: things do happen for a reason.

“Pretty much right away, we were kind of a family,” Carlie says, thinking back to when she first started dating Joe back in 2001.

Joe immediately made a connection with Jalen, Carlie’s son from another relationship who was 1 ½ years old when they met.

“I’ve always been kind of a magnet toward kids,” Joe says. “Once we started dating, I really took to Jalen. I think that made us stronger.”

Joe’s budding relationship with Jalen reminded him of how much he enjoyed being around kids and how much he actually did want to be a dad. Carlie was one of five siblings, all brothers, so naturally she hoped to be a mother to several children, with hopefully at least one of them being a daughter. And, last but not least, Jalen was becoming antsy — he wanted a sister as well.

The couple became engaged, and once Carlie was about to graduate from nursing school, the two started thinking about adding to their family.

In 2008, their lives were exactly how they had hoped: Joe and Carlie were now happily married, and Joe and Jalen shared an increasingly growing father-and-son bond. About a year later, Joe would make their father-son relationship official and adopt Jalen.

The only thing that hadn’t gone according to plan was becoming pregnant. Weeks of trying to conceive turned into months. Then before they knew it, a year had passed.

Joe and Carlie sought a fertility specialist, who opted for Carlie to have laprascopic exploratory surgery to see why she was not conceiving. The surgery indicated that Carlie’s tubes were blocked, and their only chance at pregnancy was through in vitro.

In 2009, the couple attempted two in vitro fertilizations, both of which were unsuccessful.

“It was a weird up and down rollercoaster of meds,” Joe says. “I had to give her shots every night. It was really hard on both of us.”

But then after their third attempt at in vitro, their dreams become true: Carlie was finally pregnant.

Joe and Carlie’s emotional high did not last long, however. Over the next several weeks, Carlie’s body didn’t handle the pregnancy well and she became more and more sick. After losing 18 pounds, Carlie had to be hospitalized. 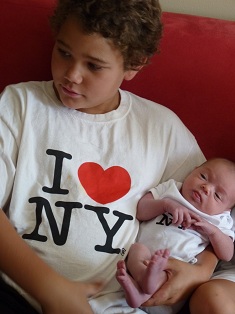 “Never again. Next time, we are adopting,” a weakened Carlie, in tears, would tell her husband.

Sadly, Joe and Carlie’s fears were realized as they suffered a miscarriage.

“Here we were at a fork in the road,” Joe says. “Do we continue putting our emotions and finances on the line to try and have our own baby? Do we find a gestational carrier to help us have a baby? Do we adopt a baby? Or do we come to the conclusion that we are not ever going to have another baby?”

Help From a Neighbor

In February 2010, Joe and Carlie decided it was time to abandon the infertility treatments and look into adoption. Within only a few days of researching adoption agencies on the Internet, they were at American Adoptions’ home offices, which just so happened to be within minutes from their own home in Kansas.

Because American Adoptions works with adoptive families in 47 states, many of them never get to meet the people who facilitate their adoption, other than over the phone. For Joe and Carlie, they were able to meet every Adoption Coordinator, Adoptive Family Specialist and Birth Parent Specialist involved in their adoption.

“They made the whole process so easy,” Joe says. “Any paperwork or any questions, we were there. It was great.”

Six months later in July, refreshed after a trip to Hawaii, Joe and Carlie received a voice mail from American Adoptions’ Lara Sandusky while they were at the Lake of the Ozarks in Missouri. Joe put his phone on speakerphone for everyone to hear and immediately returned the call.

Among the poor cellphone reception, Lara told Joe and Carlie of a birth mother who lived in New York City, whose hospital was just blocks away from Times Square. She was due to give birth to a baby boy in just five days.

“It was the best news of my life, and I could hardly hear it through the static,” Joe says.

However, the message itself was clear: Soon, they would once again become parents.

“I was just in shock,” Carlie says. “I just could not believe this was happening. Our family members were down there and everyone was freaking out. They were so happy for us.”

Joe and Carlie returned home from the lake and immediately began packing for their trip northeast. Even though they originally wanted a girl, Joe says there was absolutely no effect on their excitement. Jalen was excited to have a brother, too, and even helped pick out a few outfits for him. They all could not wait to meet their baby boy.

Little did the family know, however, the real excitement was soon to come while in New York City. 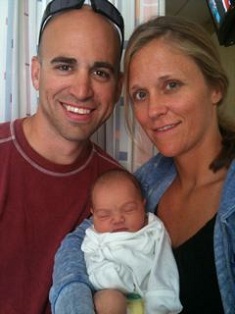 “IT’S A GIRL!” Carlie’s yell echoed through the Manhattan apartment. “OH MY GOSH, IT’S A GIRL!”

Joe grinned from ear to ear. Carlie cried and jumped out of bed with the phone still in hand and the hospital social worker still on the other end.

Jalen threw the blankets over his head, disappointed that he bought a couple of boy outfits that he was excited to dress his brother in. His disappointment would not last long, however.

Beyond thrilled to finally meet their baby girl, the family arrived at the hospital that afternoon, just two blocks from Times Square. They went into the birth mother’s hospital room and met her for the first time. Immediately, they absolutely loved her for who she was and what she did for their family. She then called for their baby to be brought in.

And that was it, the first time Joe and Carlie laid eyes on their baby daughter, Hallie Rose.

“She was beyond what I ever expected,” Carlie says. “Joe was bawling. I was in disbelief. She was so perfect. I couldn’t believe she was our baby.”

Of course, Jalen was excited too. He finally met the sister he always wanted ever since he was much younger. In fact, Jalen was one of the main reasons why Hallie would be his sister: The birth mother chose Joe and Carlie partially because Jalen reminded her of her own brother.

Joe, Carlie and Jalen spent the following night site-seeing in New York City, getting ice cream, riding the enormous Ferris wheel inside of Toys R Us, all of which would be their last memories as a family of three.

On Friday morning, the papers were signed and Hallie Rose was officially a member of their family. Their journey had culminated and there would be no more uncertainty and no more surprises. Joe and Carlie could finally breathe a sigh of relief.

A week later, following ICPC clearances, the new family flew back to Kansas with their new member.

Throughout everything that happened, Carlie believes to this day that Hallie was always meant to be a part of her and Joe’s family, and those were just the steps required to bring her home. 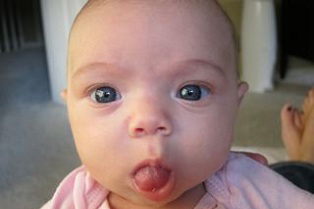 “We have learned that everything happens for a reason,” Carlie says. “Our advice to parents going through this tough process is to be calm, go about your daily life, pray about what you want to happen, trust your instincts, trust American Adoptions and know that whatever is supposed to happen is going to happen.

“Knowing what we know now, and finally having our little Hallie Rose, we would have waited a lot longer for her. The road to get where we are now was not easy, but if we made it, anyone can. Our family is now complete.”

To read more about Joe, Carlie, Jalen and Hallie, follow their blog at gilligansallnaturalisland.blogspot.com