Being Flexible - How One Couple Opened Up Their APQ Requirements

Ben and Brandy are like most adoptive parents — unable to conceive on their own, yearning to become parents and excited to start the adoption process.

However, there’s one thing that made them stand out when they started the adoption process — they were only 25 and 26 years old. 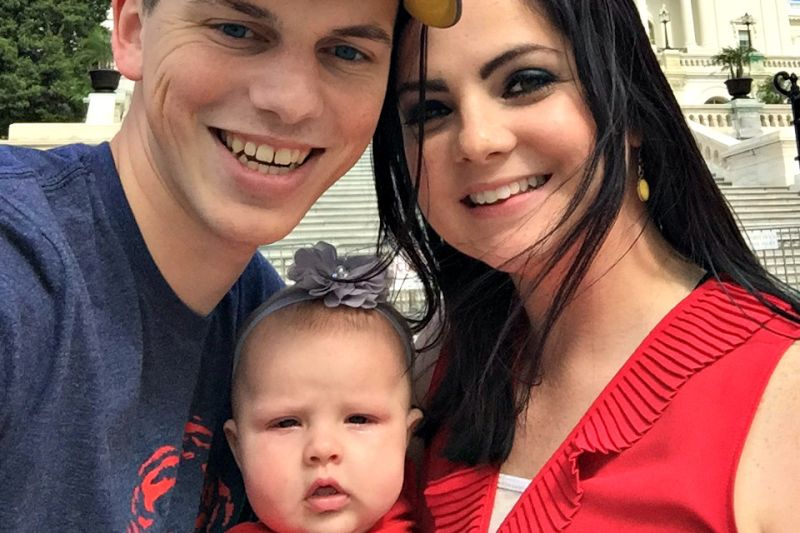 But they knew that it was time to add a baby into their lives, and they weren’t going to let their age stop them, even when faced with more financial challenges and potentially a longer wait time.

“We knew that adoption was what we’d have to do to have kids,” Brandy says. “It was really just a question of when to start the adoption process.”

When Brandy was 16 years old, she found out that she had been born without a uterus. Having kids would be impossible for her. When she married Ben, the two knew that adoption would be the way they’d become parents.

When they took a family vacation to Disneyland with their 7-month-old nephew, they knew it was time.

“Just being around him for that week or so that we were with them, I wouldn’t put him down. I was really attached to him,” Brandy says. “On the way home, Ben was like, ‘I can really tell you like being around kids. Are you ready to have your own kids?’ And I was like, ‘Yes, definitely.’”

They knew they wanted an adoption agency that would lead them through the process and take care of the details. So, when they found American Adoptions, it was the perfect fit. However, as they were preparing to go active, they knew there would be some challenges.

Originally, Ben and Brandy’s Adoption Planning Questionnaire specified for a lower-than-average budget, a Caucasian-only baby and a semi-open adoption.  They knew this might impact the time they would wait for a prospective birth mother who fit their situation, so they gradually considered opening up their preferences.

When a prospective birth mother did come along who was outside their APQ, exactly one year from their activation date, they agreed to have their profile shown.

“We just trusted that, if she chose us, it was the right thing and it was going to be what God wanted for us. So, we kind of just went with it,” Brandy says.

Waiting for the Baby

Ben and Brandy did end up being chosen by that prospective birth mother. However, she did not know whom her baby’s birth father was, requiring a bit of flexibility in the racial aspect of Ben and Brandy’s APQ.  Thanks to some number crunching and donations from family members, they were also able to manage an increased adoption budget. 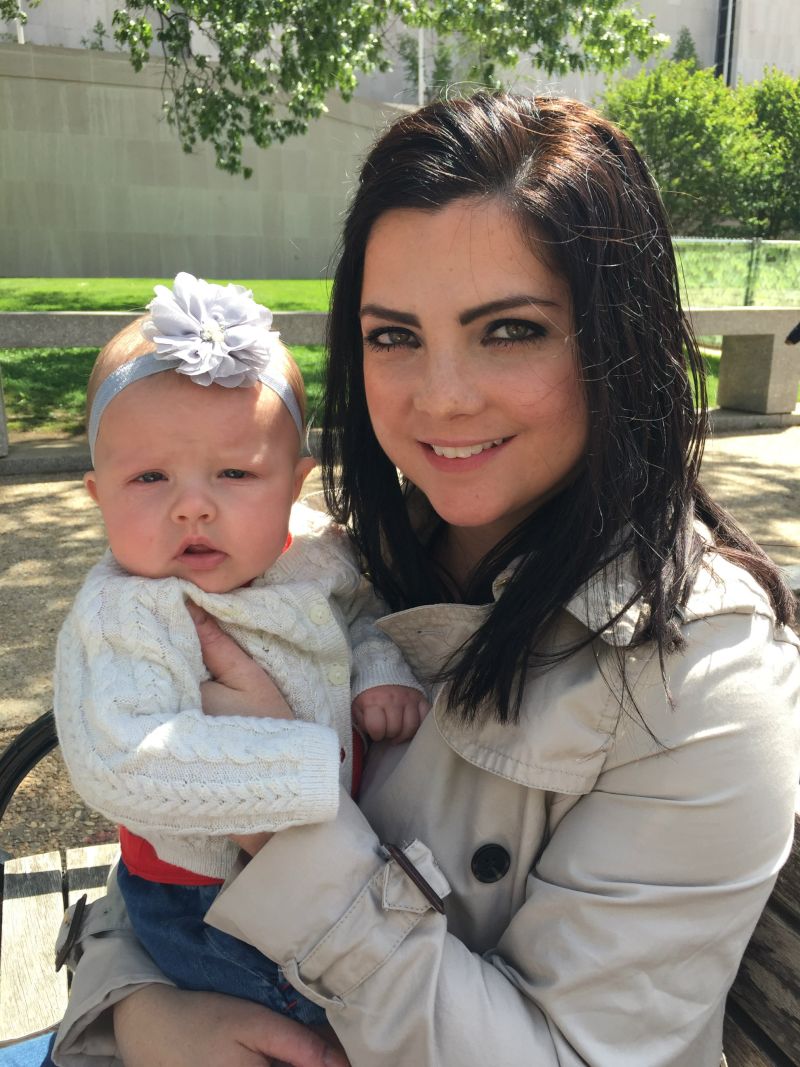 Brandy and the prospective birth mom got along well from the first phone call, exchanging emails and eventually becoming comfortable enough to share phone numbers. It turns out that Ben and Brandy’s age — the thing they were worried would prevent them from being taken seriously — was exactly the reason why she had chosen them. So, when she wanted a more open adoption, the couple knew that they could find some flexibility in that area as well.

“We’d already been thinking about it, so it really wasn’t that big of a deal at that point to go with open,” Brandy says. “It’s just how adoptions are done today and we understand that.’

To be able to meet the birth mother before her induction, Ben and Brandy decided to arrive in her home state early. Once there, they met her friends and family, which would make the adoption easy and difficult at the same time. Brandy said meeting them outside of the hospital environment allowed them to bond in a way that wouldn’t have been possible with the hustle and bustle of the hospital birth. It’s something she recommends for all adoptive parents, if the situation allows.

“It was a sweeter situation, and it kind of confirmed the adoption for her family, too,” Brandy says. “They weren’t at the hospital dealing with everything else and entertaining guests that came into town; they were focused on their grandchild, so we really got to know them, and I think that that’s better. I was definitely glad we got to have that time with her.”

When the expectant mother finally met Brandy, she said she wanted the prospective adoptive mom in the delivery room with her. Brandy had never witnessed a birth before, and being able to see her daughter being born was indescribable.

“Instantly, when Charlotte came out, I was like, ‘Oh my word, that’s our daughter,’” Brandy remembers. “I think my favorite part was when I texted Ben that she was here and Ben came into the room. Seeing him seeing her for the first time, it was so sweet; his face just lit up.”

The relationship they had built with the birth mom’s family made saying goodbye at the hospital even more difficult. Brandy remembers her heart breaking for what they were feeling.

“They were passing her around and they were like, ‘Okay, let me get one last hug in with my granddaughter; let me get one last hug,’ and that was really emotional. And I was like, ‘Oh my word, I feel terrible for taking their granddaughter away from them.’ I got really upset, because I was really happy to have her but they think they’re never going to see her again.”

Ben and Brandy stayed in Colorado for a week following Charlotte’s birth as their ICPC paperwork went through and took advantage of the chance to get to know the birth mother better. While they never formally set an open adoption communication schedule, Ben says they will always be open to visiting her, even as her communication has started to wane four months after.

“She’s not ‘moved on,’ per se; she’s more at ease with her decision, more comfortable,” Ben says. “It’s more of us reassuring her if she ever wants to visit Charlotte down the line or see her.” 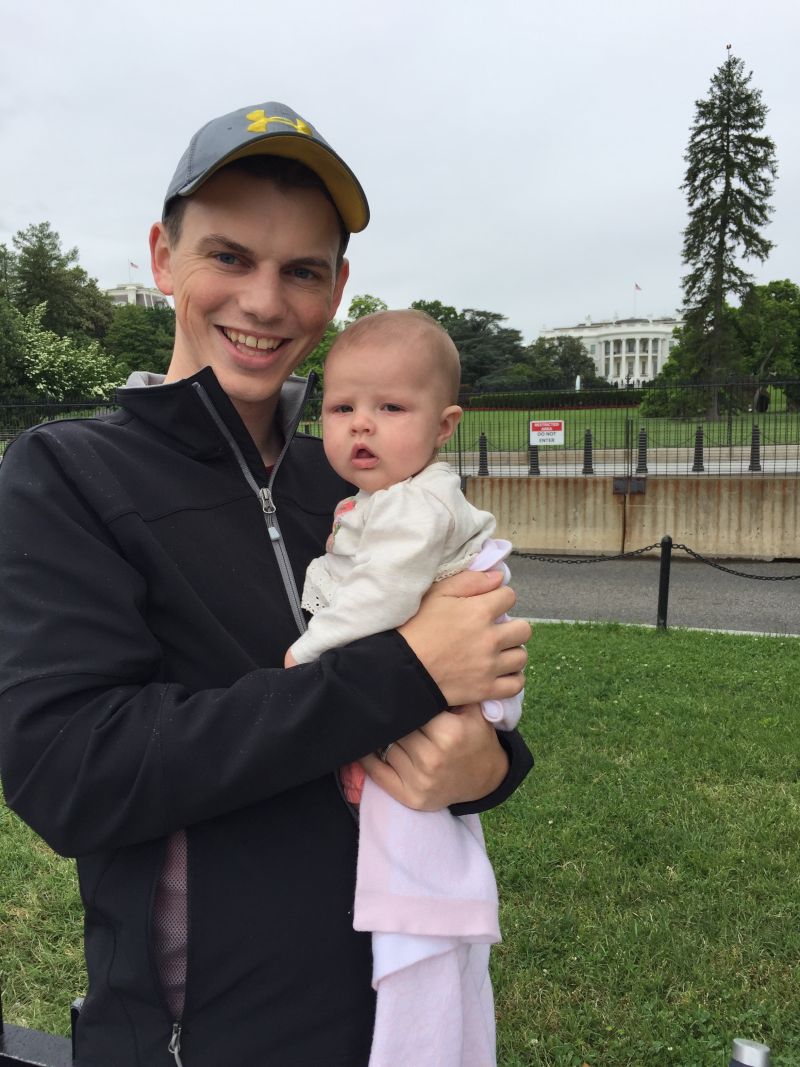 Today, Charlotte is a healthy and happy baby who brings joy to her young parents, despite the challenges of a year-long wait and a stressful adoption process. Brandy advises that all prospective adoptive parents keep themselves busy, especially if it seems like the wait stretches longer than average. The constant assistance from her adoptive family specialist Lara also helped with the waiting blues.

“I liked her from beginning to end; if we ever needed anything, she was only a phone call away,” she says. “I could call her and she could spend however long she needed to on the phone. I think that’s so unique.”

As hard as the wait was, like all adoptive parents will tell you, it was all worth it in the end for Ben and Brandy.

“It’s just surreal when we think about it,” Brandy says. “Sometimes, we’re just watching her sleep or watching her play and we’re like, ‘Oh, can you believe it, that we finally have her?’”

Request Free Information Join Us Now
Request Free Information
Join Now
Special Circumstances Adoption Stories
Three Disruptions & One Pandemic - A COVID-19 Adoption Success Story
'A Gift in a Time of Challenge' - One Family's COVID-19 Adoption Story
A Globe-Trotting Journey - How Two World Travelers Became Three
'Sticking It Out' - How One Couple Found the Strength to Start Over
'Out of Their Control' - One Family's Strength Through Birth Father Struggles
Navigating Adoption Contact - How One Family Found the Right Relationship for Them
And Baby Makes Two - How One Adoptive Mother Found Everything She Ever Wanted
It Takes a Village - Why One Adoptive Couple Turned to Crowdfunding
A Twist of Fate - How One Family Adopted Two Sisters
An Unexpected Journey - How One Family Stayed Strong Through Three Disruptions
A Blessing in Disguise - How One Family Proves There's a Match for Everyone
Second Chances - How One Family Always Stayed Positive
Adoption in the Fast Lane - One Family's Fast-Tracked Adoption Journey
Bringing Adoptive Families Together - How Two Adopted Siblings Stay in Touch
Taking a Leap of Faith - Why One Family Adopted a 'Drug Baby'
The Biggest Surprise - How One Couple Had 2 Babies in 8 Months
Adopting an Adventure - One Family's Trans-Atlantic Adoption Journey
More Articles ...
Adoption Home Study