When Keith and Jenn first went active with American Adoptions, like many families, they were nervous that a prospective birth mother would never pick them. Due to a car accident years ago, Keith uses a wheelchair, and the couple already had an 8-year-old son with severe disabilities. Why would a prospective birth mother ever pick them as the perfect family for her unborn child?

Before long, though, one birth mother had picked them — and not in spite of their family’s challenges but actually because of them.

“When she said that, we couldn’t stop smiling,” Jenn remembers. “It was just meant to be.”

Trusting in the Process

Like many adoptive families, Keith and Jenn were familiar with the in vitro process. Their son, Brandon, was born via IVF eight years ago. So, when they realized they were ready to have another baby, they went ahead with five rounds of the intrauterine insemination (IUI) process. When that didn’t work, and their doctor suggested IVF, the parents took a step back to reconsider. 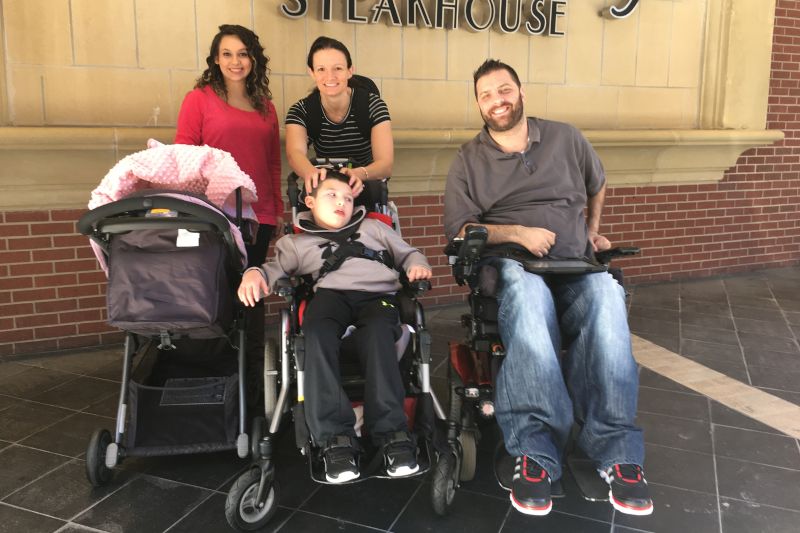 “We were, like, ‘Wait a minute; maybe this is a sign that we shouldn’t get pregnant again,’” Jenn says.

So, the couple started researching adoption. When they came across American Adoptions, the continual support from their social workers (as well as the risk-sharing insurance policy) made their choice for them. As Jenn remembers, there were no surprises at all.

As easy as it was to understand and complete the adoption activation process, one thought weighed on the couple: Would any prospective birth mother ever pick them? Their situation was certainly unique, and they feared they wouldn’t fit the “ideal” image of an adoptive family.

A month after they had been activated with no prospective contacts, Keith began to worry.

“I said, ‘It’s me,’” he remembers. “They’re going to look at me and think, ‘I’m going to allow my child to be raised by an adoptive dad with such a disability? Are they going to have time for a new child in their situation?’

“I was convinced that was going to be the thing that held us back.”

Little did they know, one prospective birth mother in Texas would change all that.

In an ironic twist of fate, Jenn and Keith were mourning the death of her grandmother the day before when they received the call from American Adoptions. Overjoyed at the news, Jenn likes to think her grandmother reunited with her grandfather once arriving in heaven, and they both sent her and Keith the most precious gift.

Angelica was a single mother with two boys already, so finding a time to talk took a couple of days. When they finally prepared for the first call, Keith and Jenn didn’t know what to expect. What were they going to talk about? What if there was a weird or awkward silence? 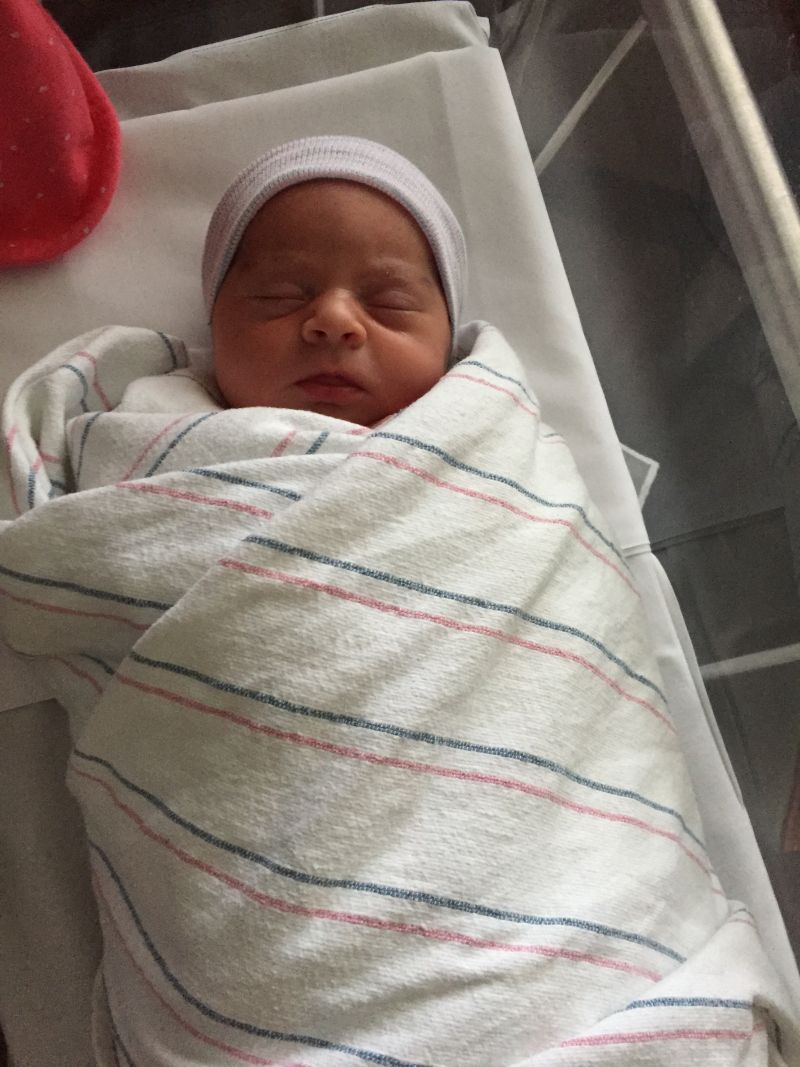 By the end of the conversation, however, they knew it was meant to be. Contrary to their fears, Angelica said their situation was actually the reason she had picked them — that their ability to overcome and stay positive in the face of adversity made them the perfect family for her daughter.

“It was kind of wild that the thing I thought was going to hold us back was the reason why she chose us,” Keith says. “It was perfect. Everything that I would have wanted in a birth mother, she was — very open and very honest.”

Angelica was looking for an open adoption, and Keith and Jenn were happy to provide her that. In addition to email contact until the birth, Angelica wanted them to be present for the birth of their daughter. So, a couple of days before Angelica was scheduled for induction in November 2016, the Rhode Island family flew down to Texas to meet her and their unborn daughter.

Keith remembers being nervous to meet the person whom they had only ever spoken to over the phone — a person on whom all their dreams rested. But, when they walked into the room, it just felt perfect, like they had known each other for years. Being present for the birth was a bonding experience like no other.

“I don’t even know how to describe it,” Jenn says. “It was amazing. I’m glad we got to share it with her, and she shared it with us. It was crazy, it was busy, it was chaotic, it was happy, it was a lot of unbelievable emotions —like this is it, this beautiful little girl.”

During their time at the hospital, Keith and Jenn spoke with their American Adoptions specialists to process the emotions they were going through. Angelica remained at the top of their priorities; they wanted to help her in whatever way they could. They shared the responsibility of caring for the daughter they had named Kaylin while they waited for Angelica to be discharged and even gifted her a bracelet as a reminder of Kaylin.

When the time came to say goodbye, emotions ran high. 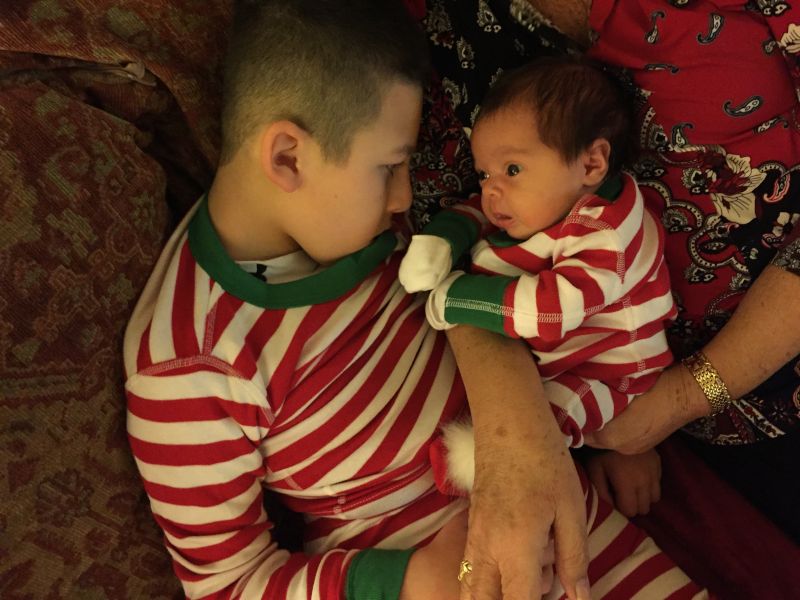 “When people ask me about the adoption, to me, it was just every single emotion you could ever have, mixed into one thing and put into a 48-hour experience,” Jenn remembers. “You’re happy, you have adrenaline, but on the other hand, you’ve just formed a bond with Angelica for two to three days and then your heart breaks for her.”

As Angelica left the hospital, she made one request of Kaylin’s adoptive parents — that they send her a photo each day to help her through her grieving process. Keith and Jenn committed to that promise and, while the frequency of the photos has dropped to two to three a week now, it’s a promise they always intend to keep.

“We have a pretty open relationship,” Jenn says. “I look forward to when she texts me back; there’s days when I send a photo and she doesn’t, and that’s okay. I’m still going to send them.”

Sometime this year, Jenn and Kaylin will make a trip to Texas to visit Angelica. The pictures and the visits are only the beginning of an open adoption relationship that they’ll figure out together as time goes by.

In the meantime, Jenn and Keith are adjusting to life with their new daughter, who loves being on the move and being around people — and just takes it all in with her big, round eyes.

“I wondered, when I started the process, if I would look at her the same I did with my son, and the answer is absolutely and profoundly yes,” Keith says. “She’s our little girl.”

“It’s just been a great addition, and I wake up every morning and have this little girl to hang out with,” Jenn adds.

While there are still unknowns when it comes to the future relationship between Kaylin, Angelica, Jenn and Keith, they look forward to the chance to continue sharing their gratitude with the birth mother who gave them everything they could have wanted.

“There’s absolutely no words, no actions, there’s nothing I could ever say that would be sufficient as a means of saying thank you to her,” Keith says.

“She completed our family,” Jenn says. “We are so blessed and lucky that she was the birth mom. We’re connected now.

“It’s like the whole thing was meant to be.”

If you’re a prospective adoptive family, please contact us today for more information.