On a cool Wednesday evening in March 2010, Craig was enjoying a night to himself at his home in Connecticut. His wife Cheryl was at her sister’s house with her and her husband’s new baby, who was just brought home from the hospital earlier that day.

Little did Craig and Cheryl know, their own family was about to change as well.

The phone rang, but Craig didn’t recognize the caller ID. Thinking it was a telemarketer, Craig let it ring. A few minutes later, the caller persisted and the phone rang again. Craig, becoming perturbed, answered the phone. On the other end was a voice he knew well.

“Hi. This is Lissa from American Adoptions. I’m calling to let you know that you’ve been selected.”

Unprepared for the news and completely in shock, Craig didn’t hear much of what was said after that, until...

After a few minutes, the realization had finally set in — Craig was going to become a father.

“I started crying. I was ecstatic, scared, excited,” Craig says. “It was like finding out your wife is pregnant. It was just an unbelievable feeling.”

Meanwhile, Cheryl was on her way to a local drugstore to pick up a few things for her baby niece. She noticed she missed a phone call from American Adoptions and decided to call Craig.

After hearing the news from her husband, Cheryl broke down and cried in the drugstore, overcome with the emotions from the journey she and Craig took to reach this moment.

Once Cheryl completed their last round of infertility treatments without success, she knew that was it – she had had enough. She had no issues moving from infertility to exploring the prospects of adoption. Craig, however, wasn’t as keen on the idea as was Cheryl.

“The hardest part for me was deciding to adopt. I was opposed to it from the beginning,” Craig says.

Craig, like many other men who have dealt with infertility in their marriage, was against adoption because he didn’t want to raise “someone else’s kid.” Naturally, Craig wanted to continue his bloodline.

After months spent looking into international adoption, a local private agency and an adoption law center, Cheryl and Craig decided to start from scratch.

“We stepped back, I went online and that’s when I came upon American Adoptions,” Cheryl says. “I felt it was large and professional, but at the same time personable and very efficient.”

The Path from the Drugstore

As Cheryl composed herself in the drugstore that night, she left the past few years of infertility behind her, forever.

Now she just had to endure the excitement and uncertainty of the next two months to meet her baby boy.

“I think, for me, it wasn’t waiting for the match because it was pretty quick,” Cheryl says. “I worried from March through May that maybe something was going to change.”

However, nothing did change. In fact, the match couldn’t have been any more convenient because the birth parents lived in Connecticut as well.

“We were fully expecting to travel,” Cheryl says. “We had an emergency stash of money, we were ready to jump on a plane somewhere, and we figured we would have to live with an infant in a hotel room. We were mentally ready for that, and then all of the sudden we find out the hospital was within an hour from our house. It was just amazing.”

After a conference call with birth mother Justine and the birth father, Craig and Cheryl decided to participate in a pre-placement visit. At dinner, they got to know the birth parents better and decided to continue communicating through e-mail, which, as a young woman, was Justine’s method of choice. E-mails were then exchanged once every couple of weeks, until the big day drew closer.

Just a few weeks later, four days before the due date of May 24, Justine told the adoptive parents to be ready. Then, that Monday morning of May 24, the couple opened their inbox and read the e-mail they had been waiting for: “I’m on the way to the hospital. Now get down here.”

Cheryl’s fears were alleviated. The day had finally come; there was no disruption and no surprises. 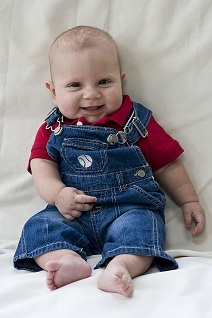 “Come in and meet your son,” the nurse told Cheryl as the new parents entered the hospital.

Cheryl was allowed in the nursery first. She walked in and approached her baby boy, Chase. He was the biggest baby in the nursery at 8 pounds, 9 ounces; bright red; and cone-headed. Cheryl thought he was the most beautiful baby she’d ever seen.

Meanwhile, Craig stood at the nursery window in amazement. He had come a long way in a year, going from not being able to raise another couple’s child to now watching his wife interact with his newborn adopted son. This was a moment he says that he would never forget.

“Looking at him through the window, watching the nurse clean him up and seeing Cheryl stand there over him — it was amazing,” Craig says. “I don’t even think about him not being my son. He is my son; that’s the bottom line.”

Today, when Craig and Cheryl look at those pictures, it is a very surreal feeling because the events of that day happened so quickly. However, the memories of that day will undoubtedly last forever.

And new memories continue to be made every day.

Chase is now almost four months old and has already been to the beach, twice. The most recent time, he got his toes dipped into the Atlantic Ocean, which Craig says that he loved. Cheryl says moments like these are something they will always cherish.

“Teaching him how to swim, how to play in the sandbox and how to build with his Legos is the everyday stuff people do with their kids that we will probably appreciate more,” she says.

American Adoptions accepts a limited number of families into our gender-specific program. Please contact us at 1-800-ADOPTION to learn whether we are currently accepting families into this program. With this option, families pay an additional Gender-Specific Fee to help our agency locate and work with birth mothers meeting this additional criterion. This fee is in addition to other program fees and covers additional advertising. The fee is not considered part of your adoption budget. Please note that gender specificity will likely increase your wait time significantly.