Justin and Jenna were no strangers to adoption. Before the couple even started their own journey, Justin had helped at an orphanage in Ghana with a friend, while Jenna had grown up with two adopted cousins.

So, after a few miscarriages and facing the reality of fertility treatments, their family-building decision was a no-brainer. 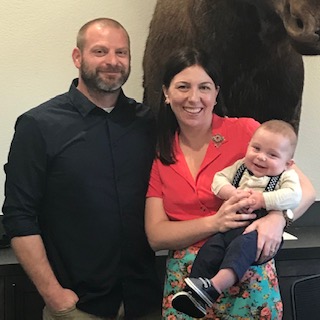 “Adoption was always an option for us — for my husband, it was probably his primary choice,” she says. “Walking out of that last appointment with the fertility doctor… we both were kind of like, ‘Why are we doing this?’

“In the parking lot, we switched gears, and the next day, we started jumping full-force into the adoption realm.”

For Jenna, that meant diving into her research. She talked to her family members and listened to countless adoption and infertility podcasts. Eventually, the couple decided that an agency-assisted domestic adoption was right for them — and that American Adoptions was the right professional to work with.

Like many adoptive parents, Jenna and Justin wrestled with the fear of the unknown in the adoption process. What would make their adoption profile stand out? What would open adoption look like? How would they know which APQ preferences were right for them?

But it would actually be Jenna’s trusty podcasts (along with a little help from American Adoptions’ website) alleviating some of those concerns. 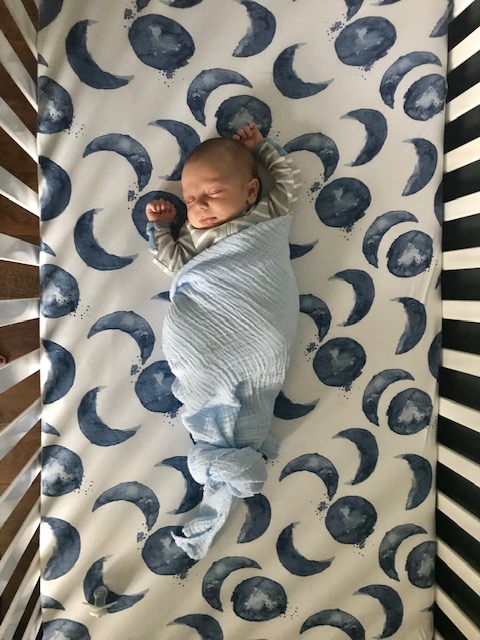 But the biggest unknown — their wait for a match — would be answered sooner than either of them expected. Just 12 days after going active, Jenna received a call from the agency. When it wasn’t her assigned adoption specialist, she knew something was up.

Sure enough, a prospective birth mother who was six months along had chosen them. And, after learning more about the situation, this decision was another no-brainer.

“I can remember being done with that conference call and my husband was still at work,” Jenna says. “When he walked in, right away, I was like, ‘I don’t even want to discuss it. Gut feeling right now: Yes or no?’ And we both said yes at the same time.”

The Hospital Experience: ‘No Way to Prepare’

While Justin and Jenna weren’t in the room when their son Max was born, the birth mother’s family was there to support her. That was more important, Jenna says, but it’s not like the couple was left in the dark.

Max was born at a hospital where adoption frequently occurred, and the staff knew the drill. They ran back and forth between the delivery room and Jenna and Justin’s room, updating them on the progress and cheering both parties along.

“Everybody that was involved in this process was touched by adoption somehow,” Jenna remembers. “The physician that delivered Max was going through the process of adopting a set of twins he was fostering… Our discharge nurse was an adoptive mom, too, so even before we left the room, she had given us a bag full of goodies and tons of free formula.” 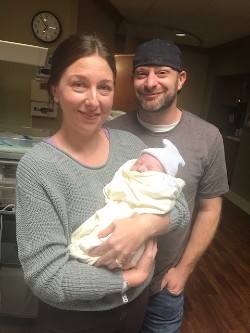 Justin and Jenna stayed just three doors down from Max’s birth mother, visiting her a few times a day after Max was born. However, it didn’t make the “goodbye” any easier.

In her pre-adoption research, Jenna had read all about the conflicting emotions adoptive parents feel at the time of discharge. Of course, they felt overwhelming happiness at finally having a child — but Jenna says she was unprepared for the intensity of the guilt and grief she would feel on behalf of Max’s birth mother.

“That was for sure, hands down, the craziest emotion I have ever felt, in a good and a bad way, and the most conflicting emotion I’ve ever felt,” Jenna remembers. “You’re so happy and you’re so joyous that this is actually happening and you’re standing in front of the woman who is actually making it possible for you… That feeling of guilt and heart-wrench for this other woman is hard to explain.”

The conflicted feelings clearly went both ways. After Max’s birth mom was discharged, her nurse came into Justin and Jenna’s room, crying.

“She said, ‘This is going to be really hard for me to say, but Max’s birth mom wanted me to come down and say she loves you — that she couldn’t say it to your face,’” Jenna remembers. “It’s stuff that like that sticks with you.” 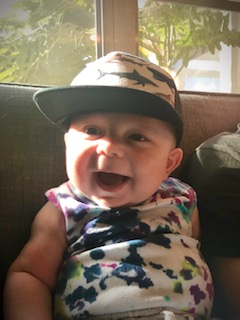 Six months after their placement, Justin and Jenna are adjusting to parenthood with a happy, calm baby who makes it easy on them. Despite Jenna not receiving short-term disability through work (“Prepare for that,” she warns other adoptive parents), she was able to scramble up her remaining time off, and the couple has leaned on Max’s grandparents for support during this new phase of their life.

And, while Max’s birth mother has had limited contact since birth, Jenna says she knows it’s just her way of healing. No matter what their open adoption contact looks like in the future, she says it won’t change anything about their relationship — or the couple’s feelings about her.

“You have this relationship with this woman for such a short time before it all happens, but she is going to always be our hero,” she says, “and we will always love her.”